The Straits Times' efforts to engage its young audience online and explore innovative ways of telling a story were recognised yesterday when it emerged the biggest winner at the Asian Digital Media Awards.

It also bagged three silvers and four bronzes, including an award for producing premium, exclusive content for subscribers.

The annual regional awards, jointly presented by the World Association of Newspapers and News Publishers (Wan-Ifra) and Google, recognise publishers who have adopted the best digital media and mobile strategies. It was held at The Mira hotel in Hong Kong.

For the ninth edition this year, the organisers received 157 entries from 27 media companies across 10 Asian markets. The winners were selected by a panel of 23 judges, mainly from the United States and Europe.

The project, which showcases artefacts of Asian deities on display at Singapore's Asian Civilisations Museum, allows readers to zoom in and rotate the sculptures virtually, giving them a closer look of these precious objects.

The other gold award went to NewsEd, a news portal and app that curates ST content and news articles for students and teachers. It won the top prize for best innovation to engage youth audience. The multimedia project, No One Dies Alone, won silver for best news website. Told through words, photos and videos, it documents the last days of a cancer patient and the volunteers who accompanied him to the end.

ST Premium, an initiative launched in February this year to produce exclusive stories, commentaries and features for subscribers, won bronze for reader revenue initiatives. NewsEd bagged a silver award in the same category.

"This is a big win for our ST readers," said Mr Warren Fernandez, ST editor and the editor-in-chief of SPH's English/ Malay/Tamil Media group. 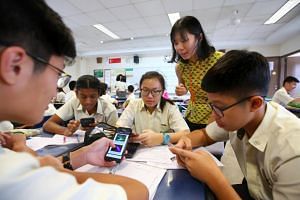 "We have been striving to develop premium content that is multimedia and which can be enjoyed across platforms to serve our readers better. So it is gratifying that we have won awards for innovation, connecting with younger audiences and also new ways of monetising that content.

"For us in the ST newsroom, the awards are an indication of what the newsroom is capable of doing, but they also remind us why we do what we do, namely to serve our readers in new ways that meet their changing needs."

Other award-winning projects include the ST Asia Report magazine, newsletter and Facebook page, which provide readers highlights of ST correspondents' reportage from across the region. An interactive game explaining the Budget also won an award.