SINGAPORE - His iconic photos taken at last year's historic Trump-Kim summit have been featured in top news publications around the world such as Time magazine, and even on a stamp by Singapore Post. The Straits Times' executive photojournalist Kevin Lim created a bit of his own history on Wednesday evening (March 13) by clinching the Journalist of the Year award at Singapore Press Holdings' (SPH) annual awards for its English/Malay/Tamil Media Group - a first for a photojournalist.

Mr Lim, 36, said he did extensive research before the June summit, poring over close to a thousand photos of United States President Donald Trump and North Korean leader Kim Jong Un to get a good sense of their mannerisms so that he would not be caught off guard.

Other big winners included ST senior health correspondent Salma Khalik, who won Story of the Year, and The New Paper journalist David Sun, who was named Young Journalist of the Year. 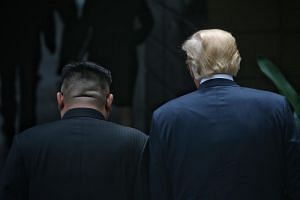 Mr Lim said of his win: "It shows that photojournalists are being recognised for the work we put in. It is not just a mere click of the button - it is a lot of thought and effort put in."

He joined ST in 2009, and has covered elections in Malaysia and Indonesia, the destruction brought by Typhoon Haiyan in Tacloban in 2013 and the aftermath of the AirAsia QZ8501 disaster in 2015.

The awards ceremony showcased the best work by journalists in The Straits Times, The Business Times, The New Paper, Berita Harian, Tamil Murasu and tabla! last year. Sixteen awards recognising work in news and feature stories, as well as visuals, page layouts and interactive graphics, were given out.

In clinching the accolade, Mr Lim beat ST's Malaysia Bureau Chief Shannon Teoh, who consistently provided authoritative insights on Malaysian politics in a landmark election year, as well as The Business Times' senior correspondent Angela Tan, who championed the cause of minority shareholders.

Ms Khalik, 64, picked up the Story of the Year for her article on insurers wanting patients to pay part of hospital bills, which affected some 1.3 million people with riders.

She said she did not expect to beat Tamil Murasu's Mohamed Fairoze, who wrote about a Singaporean love story between a widowed Indian woman and her Chinese supervisor that broke racial and cultural barriers. 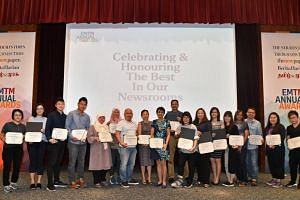 Ms Khalik added: "I have been in journalism almost 40 years. I am still hungry, I hope this will not be the last award that I win."

She said she spent five months chasing the story, and attributed the scoop to her networks and trust built up in her 18 years covering the health beat.

Mr Sun, 26, who was named Young Journalist of the Year, joined The New Paper full-time only in June last year, but had several internship stints before that. He edged out ST journalist Lim Min Zhang, 27, who covers defence.

Among the stories Mr Sun broke were Blu Jaz Cafe losing its entertainment licence and a wedding banquet where dozens fell ill. "Luck is a skill," he said. "You need to keep trying, as much as you think it is impossible. If you keep going at it, eventually you will get something."

Also recognised for their work were Ms Haryani Ismail and Ms Nur Humaira Sajat from Berita Harian, who won an Excellence in Journalism award for their heart-warming cross-media stories centred on families and the challenges they faced, while The Business Times' Ms Angela Tan picked up the award for her stories concerning the interests of minority shareholders.

In remarks at the start of the ceremony, Mr Warren Fernandez, editor-in-chief of SPH's English/ Malay/Tamil Media Group and editor of The Straits Times, spoke about the newsrooms' "5G strategy" for growth going forward, namely growing subscriptions through premium content, growing younger audiences, growing ST's international readership, growing the newsrooms by developing talent as well as growing in new areas such as video and visuals.

"From Kevin's world-class photos to scoops by a veteran like Salma and a youngster like David, our journalists have delivered some great work in the past year. Any editor anywhere in the world would be thrilled to have their work on his pages or platforms.

"And they have done this in words, photos, videos, graphics, podcasts - compelling content across all our titles.

"We do all of this to serve our readers. We invite them to revisit or check out and enjoy this fine body of work on our website."