SINGAPORE - When it comes to developments in Malaysia, it pays to look beyond the headlines.

"What you see is not what you get," said Mr Ong Keng Yong, Singapore's Ambassador-at-Large and deputy chairman at S. Rajaratnam School of International Studies at the Nanyang Technological University.

He was referring to reports that have highlighted Prime Minister Razak Najib's supposedly precarious position in the face of financial scandals that have dominated headlines from Malaysia.

"In spite of all the scandals, the situation is not so dire to make us all worry about the economy and  business situation," said Mr Ong, Singapore's former high commissioner to Malaysia. 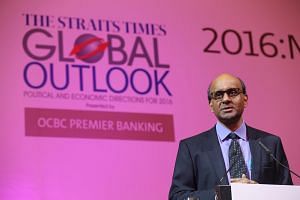 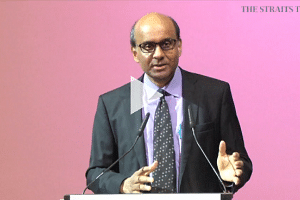 He was speaking at The Straits Times Global Outlook Forum on Friday (Nov 20) which brought together a distinguished panel of speakers, including Deputy Prime Minister Tharman Shanmugaratnam, to discuss region's challenges and prospects for 2016.

Investigations are ongoing in Malaysia into the RM2.6 billion funds discovered in the bank accounts of Mr Najib and the inability of state investment fund 1MDB to repay debts of RM42 billion have sparked calls for Mr Najib's resignation, led by former premier Mahathir Mohamad.

In spite of the scandals, Mr Najib's political position is quite secure, said Mr Ong.

Even if Malaysians do not like their leader, the Umno machinery does not allow for a change, he said, adding that he expects Mr Najib to stay on in power.

The approval rating for the Malaysian ruling Barisan Nasional coalition has hit an all-time low and that approval of Umno among Malays has plummeted to 31 per cent - the first time this has gone below the 50 per cent mark.

But as long as Mr Najib enjoys support in Sabah and Sarawak, Mr Ong noted, he will be able to command majority in parliament and does not have to fear any vote of no-confidence.

Secondly, Malaysian economy is doing well, growing at 4 to 5 per cent, although it feels the strain from bearish commodity markets,especially the fall in the prices of oil and gas.

However, while economy is not a problem, the social situation does bears watching, Mr Ong said.

Deep divisions in Malaysia along community and race lines may be exploited by groups seeking to promote their own interests.