The editors of the newspaper were unanimous in choosing Mr Lee, who died on March 23 at the age of 91.

This is the first time the award, which is in its fourth year, is given posthumously.

No other Asian has made such an impact as Mr Lee had this year. His passing was a reminder of how big a role he had played in steering and shaping modern Singapore.

He was both a visionary and a radical thinker, and his views and policies laid the foundation for what Singapore stands for. 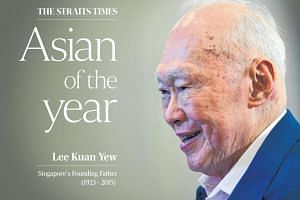 ST Asian of the Year - Lee Kuan Yew: He won the world's respect, in life as in death 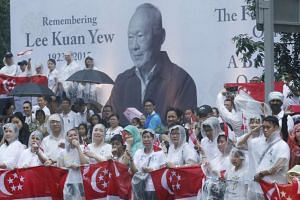 Giant on the global stage 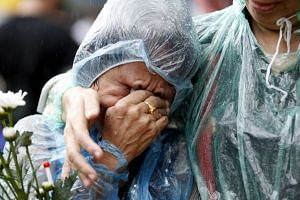 In death, he drew the nation together in grief

He was instrumental in a host of major policies that have shaped almost every aspect of Singaporeans' lives, from promoting public housing and home ownership to adopting English as a common language for the disparate races in Singapore, and planting trees and transforming the island into a "clean and green" city long before environmental consciousness became fashionable.

He played key roles in introducing policies and attracting investments that turned Singapore into a modern economic success story.

At the forefront of his policies were good governance and clean government, and his belief in a meritocratic, multiracial and multi-religious society.

He eschewed ideological positions or political correctness, and said often that he was guided in his political judgments by looking for "what works".

In death, he galvanised Singaporeans and reminded many of what the country has stood for since its founding.

The week of national mourning held in his honour saw a spontaneous outpouring of grief and drew Singaporeans closer together as a people, which some described as Mr Lee's parting gift to his countrymen.

Mr Lee's impact was felt beyond Singapore, both during his life and afterwards. His views were much sought, and his ideas much admired, by people in many other countries.

The long line of luminaries who stepped forward to pay him tribute from around the world, as well as leaders who flew in for his funeral, spoke volumes for the respect he commanded. Flags were also flown at half-mast in New Zealand and India, where processions were held in his honour.

Chinese President Xi Jinping, who referred to Mr Lee as "our senior who has our respect", called Mr Lee's death "a loss to the international community".

Former US secretary of state Henry Kissinger, Mr Lee's friend for over five decades, said he "looked at him as a teacher. I learnt much from him".

Mr Lee remained in correspondence with a succession of US presidents - Mr Richard Nixon, Mr Bill Clinton and Mr George Bush - often giving them advice on China. President Barack Obama has called him a "legendary figure of Asia in the 20th and 21st centuries".

Former British prime minister Margaret Thatcher once said on record that he was "never wrong" in his reading of issues. "There is no other world leader I have met in my time in office whom I have admired more for the strength of his convictions, the clarity of his views, the directness of his speech and for his vision of the way ahead," she said.

Few Asians have made such an impact on their nations, and the world, through their lives.