Around 70 students and members of the public discussed the increasingly pressing topics of depression and mental health at the YMCA Conversation Series 2019 held at Singapore Management University yesterday.

The annual one-day event - now in its seventh year - involves talks and discussions that centre on issues related to young people.

The focus this year was on depression, which has become more prominent recently alongside rising awareness of mental health struggles.

Samaritans of Singapore noted in July that 19 boys aged 10 to 19 committed suicide last year, the highest number since such records began in 1991.

Research attributes 62 per cent of all suicides here to mental illness.

A Singapore Mental Health Study last year found that depression was the most common mental disorder here, with 6.3 per cent having had the condition at some point in their lives.

Mr Steve Loh, general secretary and chief executive of YMCA of Singapore, said the Conversation Series took on depression as it is an "increasingly prevalent national issue". 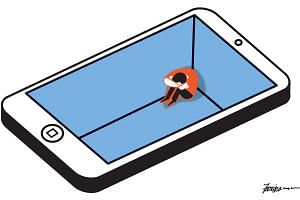 Let's talk about the 'men' in mental health

Employers should offer more 'quality jobs' to those with mental health issues: Halimah

"We are heartened to see the youth taking a keen interest in this important issue and hope we can provide a safe space to explore something that may otherwise be difficult to approach," he added.

She described depression warning signs and how to respond and support someone suffering from the condition.

A 22-year-old student and participant at the event, who disclosed that she suffers from depression, attended in the hopes of raising awareness around mental illness.

She said: "We need to be able to discuss mental health issues openly so that people aren't afraid to come forward and talk about it, and so people who need professional help will be more comfortable seeking it.

"Mental illness should be treated just like physical illnesses."