In the heart of town or in the heartland, countdown parties were all the rage as Singapore welcomed 2020 at the stroke of midnight.

Before the spectacular eight-minute fireworks display at Marina Bay to usher in the new year, revellers thronged the bay area from as early as 3pm on Tuesday to be part of the festivities.

These included live performances at Esplanade Outdoor Theatre, a pets carnival at the Civic District and a 90-minute fireworks musical at The Float @ Marina Bay with 500 drones, 3D light projections and pyrotechnics.

At 10.50pm, the drone performance lit up the night sky at Marina Bay, creating formations such as a spaceship and a whale, and culminating with an eight-minute fireworks display at midnight.

The fireworks show was produced by Japanese entertainment group Avex. At Jubilee Bridge, photographers were setting up their tripod cameras from as early as 3pm to ensure they had the best view.

One of them was part-time tutor Gary Fong, 55, who was at the Jubilee Walk footpath at 3.30pm.

"The fireworks (show) from Japan was more vibrant and colourful, much better than the normal fireworks," said Mr Fong, who was also at the Marina Bay countdown in 2018.

Earlier at the Civic District, the pets carnival attracted visitors and their pets from as early as 4pm.

The countdown celebration at Marina Bay, organised by the Urban Redevelopment Authority in collaboration with various agencies and event partners, was one of several countdown parties islandwide. 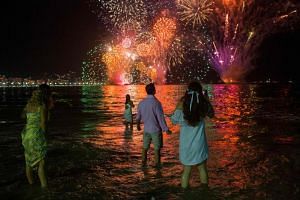 Celebrations across the globe to welcome the new year

In the heartland, those partying at Our Tampines Hub were treated to an eight-minute fireworks and laser display as the clock struck midnight.

Finance analyst Grace Lim, 27, who was there with her boyfriend, said the display was better than she had expected.

"We were expecting something shorter. For a heartland celebration, this was really good. We really like the atmosphere here," she said.

The community hub played host to around 100,000 visitors from earlier in the day, with activities such as a children's carnival and free movie screenings.

Deputy Prime Minister Heng Swee Keat, who is an MP for Tampines GRC, joined in the countdown festivities there, along with fellow MPs for the GRC - Mr Desmond Choo, Mr Baey Yam Keng and Ms Cheng Li Hui.

In a speech before the countdown, Mr Heng said Our Tampines Hub has attracted 43 million visitors, making use of facilities such as a library and swimming pool, since it opened its doors in August 2017. "For me, something special in 2019 was how Tampines residents have been coming together in Our Tampines Hub... We look forward to seeing more of you more often," he said.

Over in the north-eastern region, around 4,000 residents were at Harmony Square 2 @ Punggol East for the celebrations, which included a fireworks display. Mr Ng Chee Meng, an MP for Pasir Ris-Punggol GRC, and Mr Charles Chong, MP for Punggol East, were in attendance.

Fireworks also lit up the Yishun-Khatib area, with around 10,000 revellers gathered at MPC @ Khatib, a multi-purpose court area near Khatib MRT station.

Back at Marina Bay, the end of the big celebration meant the start of the big cleanup. A team of 250 cleaners and over 150 National Environment Agency litter-free ambassadors went around Marina Bay and the Civic District to clean up after the countdown party.

Undergraduate Jasmine Lim, 20, who was spotted picking up her own rubbish as she was leaving Marina Bay, said: "We should all try to pick up our own trash to reduce the workload of the cleaners, especially given the scale of this event. That will definitely make 2020 a better start for everyone."

A version of this article appeared in the print edition of The Straits Times on January 02, 2020, with the headline 'S'pore ushers in 2020 with festivities and fireworks across island'. Subscribe
Topics:
More
Whatsapp Linkedin FB Messenger Telegram Reddit WeChat Pinterest Print Purchase Article Copy permalink