It is a site that international teams from France, Japan and America have been working on for years.

But one of the biggest discoveries in more than a decade at the Unesco World Heritage Site of Angkor in Cambodia was made by four students from Asia.

From a small excavation pit at the ancient Tonle Snguot hospital complex, the archaeology students (some doing a master's or PhD), including Singaporean Natalie Khoo, 22, dug up three 800-year- old, 1m-tall Buddha statues over two days.

One of them was especially rare - a Bhaisajyaguru or the Buddha of healing and medicine in Mahayana Buddhism. The sandstone statue, found about 30cm in the ground, with its palms up, was cradling a medicine ball.

Ancient edicts and inscriptions state that a Bhaisajyaguru statue had been placed at each of the 102 hospitals erected by 12th-century King Jayavarman VII.

But until now, none had been found within hospital grounds. 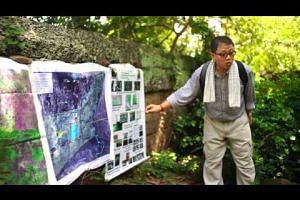 "The presence of the medicine Buddha makes it clear that he had built actual medical facilities."

Ms Khoo, a Cambridge University archaeology undergraduate, said the experience of pulling out something so rare and so major was "very exciting and unexpected".

She said: "A few nights before, we watched a presentation on the Bhaisajyaguru and were told that none had been found in situ (where they originally stood) in Cambodia.

"It was amazing that we found one at this hospital site just a few days later."

Locating and extracting statues that are intact from Angkor is extremely rare. The site had been cleared and looted of most of its Buddhist figurines. In the early days, they were thrown out when the kingdom adopted Hinduism and Theravada Buddhism. Over the past 50 years, most of what remained had been stolen and sold to private collectors.

Said Mr Lim: "The fact that these artefacts can be found, 800 years later, is super rare."

He added somewhat wryly: "I have been working for 20 years as an archaeologist, then these students come by and they have the luck of Midas to find something so significant almost instantly."

The archaeological field school - a short-term academic programme - and excavation organised by NSC was sponsored by the Ministry of Foreign Affairs (MFA) for about $70,000.

The field school had earlier made international headlines for a discovery it had helped to make on the second day of a test excavation at the same site.

The team was part of a group that had unearthed an approximately 2m-tall, late 12th-century sandstone statue sculpted in the image of a guardian. It was unearthed 8m from where the trio of Buddhas were later found.

The Tonle Snguot site had been selected by the NSC as well as researchers from the Apsara Authority - the Cambodian state agency charged with managing the site. The aim was to investigate ancient hospital activities, habitation and structures.

A total of 14 field school participants, four of them from Singapore, excavated for seven days in total. They comprised a mix of students and young professionals. The three-week programme, held in both Cambodia and Singapore, ended on Aug 16.

On their most recent discovery, Ms Khoo said she and her teammates - Ms Shaashi Ahlawat from India, Indonesian Amir Husni and Filipina Anne Marie Valera - had been digging on a sloping mound.

Cambodian archaeologist Khieu Chan, who is the site manager, and Singaporean archaeologist Michael Ng had first spotted a thin sliver of ceramic with some inscriptions poking out of a mound.

Seeing this, they decided to dig there. The students then started digging into the ground 10cm at a time. When the statues started appearing, the trench was widened.

The statues, as well as about 500kg of other artefacts, including Khmer and Chinese ceramic fragments, are now housed in a Cambodian museum and will be studied by the local authorities.

The field school also serves as a training ground for Singapore's future archaeologists. The ISEAS - Yusof Ishak Institute's NSC Archaeology Unit is relatively young and was established only in 2010.

Ms Khoo said she learnt conservation techniques from the Cambodians and how to care for artefacts in a tropical environment.

He said: "We are very happy that Singapore chose Cambodia as a platform for the field school.

"Cambodia is rich in cultural, architectural and religious features. Students from the region could identify with some shared aspects of history, such as the influence of Buddhism and Hinduism."

The field school programme is designed to create a community of scholars from East Asia Summit countries.

MFA said it hopes that its contributions to the work of the NSC will foster a "greater interest in our region's common history and awareness of the civilisational links in the region".