A strong consensus must be built around existing maritime-based rules by all countries to ensure the shared use of the seas, two Singapore leaders said yesterday, as they underlined how crucial the seas are to trade and to Singapore's prosperity.

At a defence trade fair yesterday, Defence Minister Ng Eng Hen highlighted the need for more cooperation between governments and militaries, given the threat of terrorism from the sea and the difference in rules adopted by countries over freedom of navigation and maritime resources.

"Maritime history teaches us that whenever and wherever there is conflict on the seas, surrounding countries and their common folk invariably suffer.

"Because so much depends on the seas, we need strong consensus from all countries for common rules for the seas and their use," Dr Ng said at the opening ceremony of the 12th International Maritime Defence Exhibition and Conference (Imdex) Asia.

At a separate event in the evening, Minister for Trade and Industry Chan Chun Sing said the seas are a global commons that facilitate the free flow of maritime trade, but added that sharing is effective only if countries abide by the rules.

"We need to strengthen the existing rules-based order to provide a strong foundation of the global economy of tomorrow," he said at an opening dinner of the Sixth International Maritime Security Conference.

Some 10,500 trade visitors are expected at the three-day Imdex Asia, which kicked off yesterday. The biennial maritime defence show is being held at Changi Exhibition Centre. 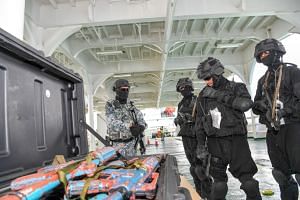 In his speech, Mr Chan said the United Nations Convention on the Law of the Sea (Unclos) - the rules of the sea - ensures free and equitable usage of the maritime commons and should not be misconstrued as a division of sea territory.

"If we start to disregard international law, pursue self-interests and curtail the freedom of the seas, we threaten the very space shared by all maritime users," he said.

He pointed out that in Asia today, there are still claims by regional states that do not abide by the terms of Unclos, which include territorial baselines drawn or claimed incorrectly, delimitations of exclusive economic zones (EEZs) from uninhabitable rocks, and enforcement of EEZ for reasons other than protection of economic rights. "Such claims go against the spirit of how Unclos was formed," he added.

Separately, Dr Ng said the seas still hold powerful forces that can shape the destinies of countries, even as global connectivity has increased over air, land and the Internet.

While traditional maritime threats persist - such as transnational maritime terrorism, piracy, armed robbery and the trafficking of drugs, weapons and humans - better cooperation and organisation have led to improvement in some of these areas, he said.

However, there are other new challenges that require more work, such as the potential terrorist threats on the southern flanks during last year's historic summit between United States President Donald Trump and North Korean leader Kim Jong Un held on Sentosa.

There is also a need to boost intelligence efforts as the centre of gravity of global terrorism shifts from the Middle East to other places, including this region, which has been susceptible to radical ideologies.

Citing how Asean navies have adopted and practised the Code for Unplanned Encounters at Sea (Cues) at several maritime exercises with partner countries since November 2017, Dr Ng said such initiatives between regional navies reduce the risks of misunderstandings and unintended escalation.

Besides Cues, Mr Chan said participating in open and inclusive dialogues such as the Shangri-La Dialogue - an annual regional security forum held in Singapore - and holding exercises between navies could help build trust between countries.