Singapore and Vietnam yesterday welcomed the prospect of increasing connectivity between them, through enhancing their air services agreement.

Prime Minister Lee Hsien Loong asked that flights from Singapore be allowed to pick up passengers in major Vietnamese cities before flying off to a third country, or what is known as fifth freedom rights in the aviation industry.

This was among the issues discussed yesterday during talks between PM Lee and Vietnam's President Tran Dai Quang, who is in Singapore on a three-day state visit which ends today.

A joint statement, issued by the foreign ministries of both nations, said both sides acknowledged that such a move would increase the flow of goods and people, spurring economic development in Vietnam.

PM Lee also asked that United Overseas Bank (UOB) be "expeditiously" issued a foreign-owned subsidiary bank licence for it to provide financial services in Vietnam for companies of both nations.

Responding, Mr Quang said he would instruct Vietnam's relevant agencies to work closely with UOB to finalise the technical details for the licence, said the statement.

Mr Quang, who arrived on Sunday, was hosted to lunch by PM Lee yesterday. 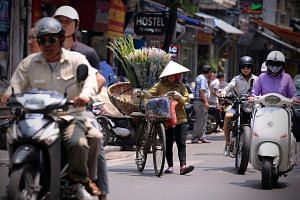 Earlier in the day, he was given a ceremonial welcome at the Istana when he called on President Tony Tan Keng Yam.

The importance of upholding freedom of navigation in and overflight above the South China Sea was also reaffirmed by both countries, said the statement.

Vietnam and four countries - China, the Philippines, Brunei, and Malaysia - have overlapping territorial claims in the South China Sea.

The statement also reiterated Asean's position that disputes should be resolved peacefully according to international law, and all parties should work towards the adoption of a code of conduct in the South China Sea.

Last night, at an Istana state banquet for Mr Quang, Dr Tan said economic cooperation is a mainstay of ties between both countries, which established diplomatic relations in 1973.

"Today, Vietnam has become one of South-east Asia's fastest-growing economies and a robust partner of Singapore," Dr Tan added.

Mr Quang, speaking in Vietnamese, called Singapore a "trusted and respected companion" since Vietnam began its transition to a free market economy in the early 1990s.

Both presidents cited the success of the Vietnam-Singapore Industrial Parks programme, which has drawn US$9 billion (S$12.2 billion) of investments and employs over 170,000 people. The seven parks are located across Vietnam, which Deputy Prime Minister Teo Chee Hean will visit next month for the 20th anniversary celebrations of the programme.

Both countries also believe in the benefits of increased trade links.

They had also upgraded relations three years ago to a strategic partnership, which opened new avenues of cooperation between them, including defence, education, training, finance and security.

Yesterday, Mr Quang and his wife Nguyen Thi Hien visited the Singapore Botanic Gardens, where an orchid was named in their honour.

Today, he will meet DPM Teo and Emeritus Senior Minister Goh Chok Tong, as well as give the 38th Singapore Lecture of the Iseas - Yusof Ishak Institute.