The Singapore Armed Forces yesterday completed its command of a multinational counter-piracy task force. Its efforts contributed to zero piracy attacks in the Gulf of Aden in the past three months, said the Ministry of Defence in a statement.

SAF's Rear-Admiral Saw Shi Tat handed over command of Combined Task Force 151 (CTF 151) to Captain Ali Alrashidi of the Kuwait Naval Force in a ceremony at the Naval Support Activity base in Bahrain.

Over the past three months, the SAF led CTF 151 in coordinating operations to deter and disrupt piracy in the Gulf of Aden from its base in Bahrain.

RADM Saw and his team left an "impressive mark" on the Combined Maritime Forces (CMF), said CMF commander, US Vice-Admiral Scott A. Stearney.

CTF 151 comes under the CMF, a multinational naval partnership led by the United States.

Vice-Adm Stearney said the good performance by the team was a testament to the professionalism, dedication and commitment of SAF personnel.

"Whether it was improving our relationships with key leaders in the region, overseeing hundreds of hours of airborne surveillance of critical maritime reaches or keeping the sea lanes of the Gulf of Aden safe while rendering assistance to mariners at risk when needed, RADM Saw and his team left an impressive mark on the CMF, " he said. 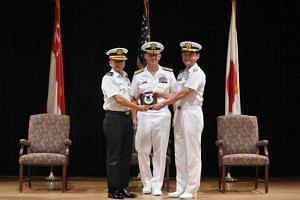 RADM Saw, 42, said the strong relationship between the Singapore-led team and the various counter-piracy agencies in the region was one success factor for the deployment.

This enabled effective information sharing and better operational coordination of forces for counter-piracy operations, he said.

"The successful deployment is important to Singapore because the efforts helped to protect the strategic waterways in the Gulf of Aden through which a large proportion of global maritime trade passes," he added.

During the term, the CTF 151 command team shared information with partners such as the European Union Naval Force and independently deployed navies from China and India.

One of them was SAF Captain Dean Wong, 29, who served as a battle watch captain.

He said the main challenge he faced was connectivity with the ships under the task force's command. He added: "However, the task force managed to work out procedures that enabled ships at sea to still be able to continue with their mission regardless of the connectivity."

Since the SAF's first contribution to CTF 151 in 2009, it has deployed more than 1,400 personnel, five command teams, five task groups, and one detachment of an F-50 maritime patrol aircraft.

She took time off from her job as a general manager for ground operations and customer service with Changi Airport Group to take part.

"Given that I was in service for more than 17 years, my family was fully supportive... Even my (nine-year-old) son was really excited that I would be deploying with the navy to 'fight pirates'," she said.