Putting their new pledge to build an all-round partnership into action, Singapore and China inked several crucial pacts and agreed to explore several areas of cooperation to create opportunities for their people and businesses.

In a Facebook post, PM Lee said he had a fruitful meeting with Mr Xi, whose two-day state visit, he added, "further deepened the bilateral relationship".

Citing how the pacts will "open up more opportunities for mutual exchange, trade, investments and development", Mr Lee wrote: "China's dramatic progress is positive for the region and the world."

Another six agreements on areas such as education cooperation, urban management and collaboration between the two Customs authorities were also inked.

China is bound to become more prosperous and stronger, but it is not an inexorable law of history that a powerful country will seek hegemony. China believes the strong should not bully the weak and the rich should not humiliate the poor... China will stick to the path of peaceful development and an independent, peace-oriented foreign policy. This is not an expedient tactic, but our strategic choice and solemn commitment.

A key highlight of Mr Xi's visit here to mark 25 years of diplomatic relations was the setting up of an "All-Round Cooperative Partnership Progressing with the Times".

A Ministry of Foreign Affairs (MFA) statement said Mr Lee and Mr Xi agreed to issue a joint statement on the partnership "to define the forward-looking, innovative, and multifaceted nature of our bilateral ties". The joint statement listed 19 areas of consensus, such as fully tapping existing inter-governmental cooperation mechanisms like the Joint Council for Bilateral Cooperation chaired by the two countries' deputy prime ministers.

Both sides also agreed to further develop the two flagship government-led projects - Suzhou Industrial Park and Tianjin Eco-city - as they voiced strong support for the latest one, the China-Singapore (Chongqing) Demonstration Initiative on Strategic Connectivity.

"Both countries are fully committed to and shall provide full support for the success of the initiative," said the joint statement. 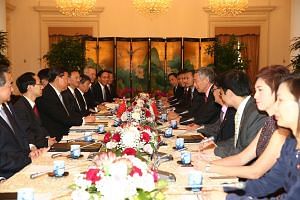 Both sides also agreed to strengthen consultation and cooperation on regional and global issues, and also on issues of common interest through mechanisms such as the United Nations, World Trade Organisation and the Asia-Pacific Economic Cooperation. 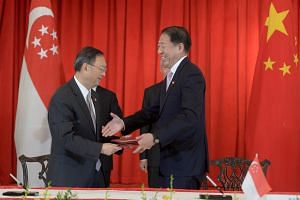 Leaving room for even greater cooperation, the two sides noted that the present statement "does not preclude other areas of cooperation" that may emerge in the future. 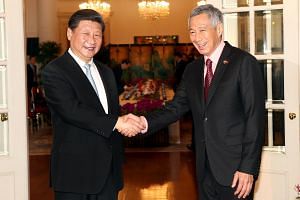 A key factor for the development of Sino-Singapore ties is their young people, who need to understand the culture and history of both countries, and foster deeper friendship, Mr Xi said when he delivered the 36th Singapore Lecture at the National University of Singapore yesterday. Earlier in the day, Mr Xi, together with Emeritus Senior Minister Goh Chok Tong, opened the 11-storey China Cultural Centre in Queen Street. He and his wife Peng Liyuan later visited the Singapore Botanic Gardens, where a tall orchid was named after them.

The MFA statement also said that Mr Lee accepted Mr Xi's invitation to Singapore to take part in the G-20 meetings and G-20 Summit to be held in China next year.

Orchid named after Xi and wife

Upgraded FTA will give boost to businesses