There were 72 alcohol-attributable deaths from road traffic injuries here in 2016, 68 from liver cirrhosis and 252 from cancer, according to World Health Organisation (WHO) data on Friday.

The prevalence of alcohol-use disorders, including dependence and harmful use, was 1.7 per cent for males and 0.5 per cent for females.

Singapore males above the age of 15 drank 3.3 litres of alcohol per capita - measured in litres of pure alcohol - in 2016, compared with 0.8 litre for females in the same age range.

Combining both genders, the figure is 2 litres.

Data on recorded alcohol per capita consumption shows that the most popular beverage here was beer (70 per cent), followed by wine (15 per cent) and spirits (13 per cent).

The prevalence of heavy episodic drinking - defined as having consumed at least 60g of pure alcohol on at least one occasion in the past 30 days - was 46.9 per cent for males and 13.8 per cent for females, for those above 15 years old. 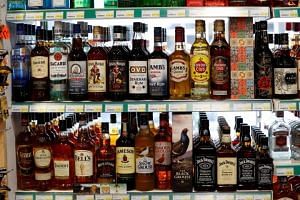 Alcohol responsible for 1 in 20 deaths worldwide: WHO

There is no safe level of alcohol consumption, major study says

The WHO report noted that 3.1 per cent of males were lifetime abstainers in 2016, compared with 10.2 per cent for females.

Singapore's data was obtained from the Food and Agriculture Organisation of the United Nations, the World Drink Trends survey and Singapore national statistics.

A version of this article appeared in the print edition of The Sunday Times on September 23, 2018, with the headline 'S'pore: 72 road injury deaths due to alcohol in 2016'. Subscribe
Topics:
More
Whatsapp Linkedin FB Messenger Telegram Reddit WeChat Pinterest Print Purchase Article Copy permalink