These will be in place by tomorrow; some residents call for better sidewalk protection

New speed-regulating strips will be installed at a Marine Parade roundabout tomorrow following a fatal accident there last week.

Mountbatten MP Lim Biow Chuan, who first said the strips would be installed in a Facebook post on Saturday, also included a map showing the two sections where the strips will be.

These will be in addition to the warning signs at the side of the road, he said in the post.

Mr Lim told The Straits Times on Sunday that the areas selected were the entry points into the roundabout. "The issue here is to keep the place safe, and safety is dependent on driver behaviour," he said. "If a driver is reckless and drives into a roundabout at a fast speed, it is dangerous."

He would do a site visit with Land Transport Authority (LTA) officers today, he added.

LTA confirmed on Sunday night that it will be carrying out roadworks at the roundabout tomorrow. The roadworks are expected to be completed the same day.

Besides the speed-regulating strips, LTA said it would put up new speed advisory signs to remind motorists of the 30kmh speed limit. The signs would be placed before the roundabout as cars approach from Marine Parade Road or Amber Road.

An LTA spokesman said that to facilitate these improvements, lanes would be partially closed. Directional and information signs would be placed to guide motorists and other road users.

LTA would monitor the effectiveness of the scheme and concurrently review the feasibility of implementing additional safety measures, the spokesman added.

Last Monday, an 82-year-old woman on a sidewalk died in an accident with a car at the roundabout.

A resident who lives in the Silversea condominium, Ms Daniela Romao, 36, told ST last week that residents in the area had been worried about safety at the roundabout for months.

Many residents walk along the road when sending their children to school or when heading to the nearby Parkway Parade shopping mall, Ms Romao said.

After being told about the new measures, she said: "It is good that (the authorities) are taking action fast and really quickly, but it's still not enough."

She suggested redesigning the area so that there are traffic crossings instead of a roundabout.

"Speed bumps are a good beginning. It's positive, but not sufficient to solve this safety problem. They also need to install some protection for the sidewalk," said Ms Romao, who owns a corporate and business mobility company. 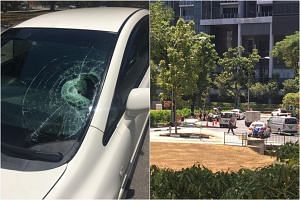 Ms Beverly Paulis-Lukaszewski, 39, agreed with her neighbour, Ms Romao, on the need for protection on the sidewalks.

She suggested putting up concrete barriers instead of the usual green metal railings, which she said provided a false sense of security.

Ms Paulis-Lukaszewski, a housewife, said the existing situation was so unsafe that she made it a point to avoid walking along the roundabout when she sends her four-year-old son to pre-school.

Ms Shann Mottram, also a Silversea resident, said the problem has to do with drivers who do not stop or give way, or do not know how to negotiate the road when using the roundabout.

She said she had been involved in an accident at the roundabout in 2017 when a car on the inner lane tried to cut across to exit the roundabout abruptly, which led to a collision.

While the speed-regulating strips are a welcome move, still more needs to be done before another fatal accident occurs, said Ms Mottram, 39, a sales manager.

As a driver who uses the roundabout daily, Ms Mottram felt that it was important to educate drivers on how to give way and manoeuvre around the roundabout.

On this point, Mr Lim said drivers should slow down, especially when going into a roundabout, which they may not be familiar with.

The solution to the safety problem at the roundabout is to change driver behaviour, and installing the speed-regulating strips is the quickest way, he said.

Many residents have called for metal railings to be put up on the sidewalk, but these can only mitigate major impact from a speeding vehicle.

Mr Lim said he would discuss with LTA the possibility of railings, along with making the roundabout a junction with traffic signals.

He added that LTA would have to do a technical assessment to determine the feasibility of the safety measures.