The Ministry of Social and Family Development's Child Protective Service (CPS) received 2,022 inquiries about child abuse last year and handled them based on the nature, severity and frequency of the abuse allegations, among other considerations.

It investigated 551 of the most serious cases. These included children who had been sexually violated, or seriously hurt by a family member.

In 2013, the ministry appointed two charities - Big Love and Heart@Fei Yue - to specialise in managing cases that are considered of moderate risk. A third such centre, run by Pave, will be up in the first half of next year. 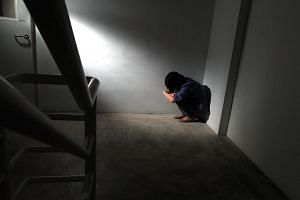 Moderate-risk cases include children who are caned excessively by parents, and those whose welfare may be neglected by drug-addicted parents, said Big Love centre director Wong Meng Kong. "If nothing is done, the child will suffer," he said.

Cases included that of a consultant in his 40s who would hit his wife and three children whenever he was angry. His eldest child, a 15-year-old girl, had to go to a hospital as one of the marks she received from caning had to be stitched up.

The hospital alerted the CPS, and the case was referred to Big Love, whose staff realised that the man could be mentally ill. They encouraged him to see a doctor and taught him how to manage his anger and communicate with his children. The beatings have since stopped.

About 10 per cent of the inquiries that CPS received last year were deemed of low risk. Such cases were referred to family service centres.

These included instances of families under stress because of money, marital or health problems. Their situation affected their ability to look after their children.

Ms Samantha Lim, assistant director of the Singapore Children's Society Family Service Centre (Yishun), said families are plunged into a crisis when the breadwinner falls ill, a parent walks out or is sent to jail. The remaining parent may be overwhelmed by the crisis and so neglects the children.

So social workers step in to link these families to financial aid and other forms of support.

The CPS attended to remaining inquiries by giving them relevant information, or referring them to other agencies that could help. It has received an average of about 2,000 inquiries a year in the last four years. Most calls were from hospitals, schools, the police, the courts and voluntary welfare organisations.