A 16-year-old boy with autism wandered the streets and braved the elements for a stretch of 10 days last month.

The slim-built boy had gone missing at about noon on March 14 at Tah Ching Road, off Yuan Chin Road in Jurong. The police sent out a missing person appeal on its Twitter account on March 16.

His frantic parents and staff from his school Grace Orchard, which caters to students with mild intellectual disabilities, combed the island, but were not able to find him.

Friends went online to help them spread the word about the lost boy but, for more than a week, there was no news of him.

It was only a full 10 days later, on March 24, that the teen was found by members of the public in Bukit Panjang. He was wearing the same clothes which he was last seen in - a red and white colour striped shirt and brown shorts - and believed to be barefooted. 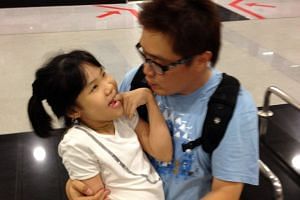 It is still not clear how he managed over those 10 days - what he ate, what he drank, where he slept, how he spent his days - but the family was overjoyed to get him back in good shape.

His parents declined to speak to the media.

Incidences of children or teenagers with special needs going missing seem to be happening more frequently, say people in the special needs community, though there are no official statistics.

The police do not have a breakdown on the specific numbers of young people with special needs who have gone missing.

Last Sunday, a student from Rainbow Centre also went missing, and was found after a four-hour search at night.

In February, Calder Kam, a 12-year-old boy with autism, was found at Changi Airport after a three-hour search.

His mother Brenda Tan had let him out of sight for just a few moments in Hougang, and the boy had boarded a bus in that time and taken a one-hour bus journey to the airport.

Said Dr Lam Chee Meng, principal autism consultant at Autism Resource Centre: "We observe that more families are resorting to social media to help find their children with special needs who may be missing, and this development may have led to the observation that more are reported missing."

REASONS FOR RISE IN NUMBERS

We do keep them accompanied all the time, and we try to act like a 360-degree surveillance camera but they are easily distracted and can disappear within seconds.

He added: "More parents are also open to taking out their children with special needs compared with the past."

In the case of the 16-year-old boy, The Sunday Times understands that he was lost and unaccounted for several times last year.

The Ministry of Social and Family Development said it has since worked with various parties "to provide the boy and his family with the necessary support to ensure his safety and well-being".

Ms Koh Soek Ying, 51, whose son Ryan, 21, has autism, said it is a delicate balancing act of trying to train him to be independent, yet knowing that his "cognitive ability will forever leave him vulnerable to the world".

Ms Koh herself had a huge scare a few years ago.

Her son had a swimming competition at the OCBC Aquatic Centre. The teacher was leading them in, but paused for a moment to look at the scoreboard outside.

In the blink of an eye, her son vanished. The teacher panicked and went to the spectator stands to alert Ms Koh.

Fortunately, they found him in the warm-up pool not too long after.

Ms Koh said: "We do keep them accompanied all the time, and we try to act like a 360-degree surveillance camera, but they are easily distracted and can disappear within seconds.

"In such situations, having community awareness and support are crucial, because people like Ryan have difficulty articulating their thoughts."

Dr Lam said children with autism or other special needs may not know how to ask for help if they get lost.

So, parents can train their children on what they should do and who they should approach for help when they lose their way.

For children who are unable to speak much, parents can also leave them with notes or identification cards that their children can show others if they are lost.

If members of the public notice a child or teenager who is alone and behaving strangely, Dr Lam said the individual should stop to check if he needs help, seek assistance from the police and stay with the child until help arrives.

Mr Moses Ku, head of communications at Rainbow Centre, said many of the traits that characterise autism make it more likely for children with autism to wander and get lost. Some of these traits could be the impulse to seek out something of special interest, or to escape an overstimulating environment, studies show.

Mr Ku said: "When a child goes missing, parents and caregivers are encouraged to share the unique interests of the child and a list of favourite places with the people helping with the search."

"To help them become independent and functional members of the society, we need to have a better support system to accommodate their needs," she said.

A version of this article appeared in the print edition of The Sunday Times on April 16, 2017, with the headline 'Special needs kids go missing in the blink of an eye'. Subscribe
Topics:
More
Whatsapp Linkedin FB Messenger Telegram Reddit WeChat Pinterest Print Purchase Article Copy permalink