For 74 years, Mr Simon Woo's family has been brewing soya sauce using the traditional method of fermenting soya beans in vats under the sun. We look at how a local company sticks to tradition despite the challenges.

In a 6m by 4m sauna-like room in a Defu Industrial Park factory, four men wearing disposable shower caps, masks and aprons are hard at work.

It's all arms, palms and fingers on deck, pushing and massaging millions of soya beans - that have been steamed and cooled hours in advance earlier in the morning - to ensure that every bean is coated with wheat flour and a fermenting agent.

This is in preparation for an early stage of creating an Asian condiment that has been around for thousands of years: soya sauce.

On the sidelines, Kwong Woh Hing Sauce Factory director Simon Woo, 52, and his sister, Ms Hannah Woo, 65, who is in charge of the soya sauce department, watch intensely, occasionally giving directions to correct the workers' techniques and eventually lending a hand.

The processed beans are then scooped up and spread out on trays stacked neatly around the perimeter of the small room.

Exposed to humidity, the beans will remain there for four to seven days for the wheat and fermenting agent to do their work.

After that, the beans are moved to vats and containers in a courtyard where they will be soaked in brine for the final stage of fermentation under the sun: one year for light soya sauce and 11/2 years for dark soya sauce.

MORE THAN JUST A BUSINESS

As a legacy, as long as you believe in working hard and carrying on making the best sauces, this will help you walk a longer path.

The fermented beans will then be blended with ingredients known only to the Woos.

For 74 years, this is how Mr Woo's family has brewed soya sauce, using the traditional and long process of fermentation under the sun, following techniques passed down by his late father, Mr Woo Hoh, who died when Mr Woo was three years old.

Seven of the elder Mr Woo's 12 children are in the family business, doing various tasks from delivery to being in charge of the chilli department.

Mr Woo Hoh arrived in Singapore in 1940 from Guangzhou, China.

With knowledge acquired under the tutelage of a soya sauce master, and with the support and encouragement of friends, he set up Kwong Woh Hing Sauce Factory near Kallang Gasworks in 1943. Since then, his soya sauce has drawn a loyal group of customers who followed the company's move from its first factory in Kallang to Tai Seng, and then to Defu Industrial Park in 1985.

Because of the long fermentation period needed and limited production space, the Woos cannot mass-produce or sell their products at supermarkets, which typically place big orders.

Their consumer soya sauces are sold at wet markets, at their roadshows and at their factory, where sometimes even tourists turn up.

At the factory, for the premium range, a bottle of light soya sauce sells for $9.30 and the dark soya sauce costs $10.30 a bottle.

It was only late last year, after much dogged persistence, that a high-end supermarket managed to convince the Woos to place a number of bottles on its shelves. 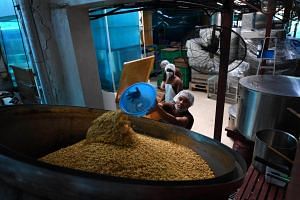 In Pictures: Soya sauce made the traditional way

Despite the introduction of chemical hydrolysis in the 1980s that allows soya sauce to be manufactured in just two days and in high volume, the Woos have no intention of changing their methods.

"They are the reason we still exist and what they want is our persistence in maintaining soya sauces of such flavours."

Most of the soya sauce factories that mushroomed in the same year that his father set up Kwong Woh Hing have disappeared.

But Mr Woo acknowledged that there have been challenges.

It is difficult to hire workers who are able to put up with the workload and working conditions. They also need to attract new customers to replace older ones.

Mr Woo added that rental costs will also be much higher when the business moves to a new factory in Bedok Food City around 2020.

Since heading the business 15 years ago, he has taken the business online, created a premium range of soya sauces in an image makeover, and come up with 10 different sauces, such as roasted duck sauce and oyster sauce.

"In my father's time, by simply focusing the business on soya sauce brewing, he could run a village, but now, if we don't diversify, you cannot pay the rent, much less run a village," he said.

Mr Woo is also trying to get his sons and nephews to take over the family business and continue with the family's legacy.

"I want to show them the importance of a legacy. If you just see it as a future, you'll easily feel disheartened because the fermentation business can't be very lucrative. But as a legacy, as long as you believe in working hard and carrying on making the best sauces, this will help you walk a longer path."

Mr Darren Woo, 22, Mr Woo's youngest son, studied green building and sustainability at Temasek Polytechnic and is interested in architecture, but he decided to work in the family business.

VIDEO
See how soya sauce is made the traditional way. http://str.sg/4bxP