A group of academics has said it cannot accept the Ministry of Education's (MOE) assurances that the proposed law against online falsehoods will not affect their work.

The 83 academics from around the world, including Singaporeans based at home and overseas, made clear in a press release yesterday that they wanted the assurances to be reflected in the draft legislation.

The group said: "We note its assurances that the proposed law will not affect academic work. But we cannot accept this as a categorical guarantee until it is reflected in the language of the Bill."

The group acknowledged that the "disinformation dilemma that has prompted the Singapore Government to act is a real one" that has resulted in "the corruption of democratic processes and the spread of hate propaganda against defenceless communities".

"Many of our colleagues are directly engaged in researching this urgent problem and have contributed to emerging best practices for dealing with it," the group said.

It stressed that academics are at the front line of the battle in the "global assault on reason", and that "no country's response should undermine the very capacities it requires to deal with this crisis".

The group said: "Our concern about the proposed legislation cannot be divorced from larger issues around academic freedom in the Republic."

We note its assurances that the proposed law will not affect academic work. But we cannot accept this as a categorical guarantee until it is reflected in the language of the Bill.

A JOINT PRESS RELEASE FROM 83 ACADEMICS, rejecting the Ministry of Education's assurances. 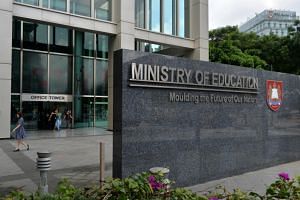 Draft law on online falsehoods will not affect academic work, regardless of viewpoint: MOE

Last Thursday, the group sent a letter to Education Minister Ong Ye Kung, raising concerns about the "unintended detrimental consequences" of the Bill which could lead to self-censorship.

While it acknowledged that the proposed law is not targeted at the academic community and does not apply to opinion, criticisms, satire and parody, the group said that much of academic work involves the disputing of "apparently established 'facts'", which could potentially put scholars and researchers in the cross hairs of the proposed law.

This drew a response last Friday from MOE, saying the draft law does not restrict opinion and will not affect academic research work.

"The Bill covers verifiably false statements of fact which affect public interest. The Bill does not restrict opinion and will not affect academic research work," MOE said.

The ministry said the academics - "the overwhelming majority of whom are based overseas" - can also refer to statements which law professors have made on the Bill.

For instance, Singapore Management University (SMU) School of Law dean Goh Yihan said at a recent forum on fake news that the Bill strikes a right balance in giving ministers the power to make the initial call to swiftly address the problem, and then allowing that decision to be challenged in court.

MOE added: "We have extended an invitation to the autonomous universities to hold discussion sessions for their academics to clarify any concerns they may have, and look forward to meaningful discussions on the Bill."

The letter from the academics to Mr Ong bore 83 signatories as of noon yesterday, 25 more than the number who signed last Thursday.

While the group noted that most of the signatories are not based in Singapore, there are several academics based in Singapore who "privately expressed agreement" with the letter. However, they did not sign it "for fear of compromising their career prospects".