SINGAPORE/BELITUNG (Indonesia) - Thousands of people in Singapore and Indonesia are expected to train their collective gaze on the sky in anticipation of a solar eclipse on Wednesday (March 9) morning.

In Singapore, the spectacle - a partial eclipse - is set to start at around 7.20am, peaking at 8.23am where 87 per cent of the sun will be obscured, revealing a bright orange crescent. It will end at 9.30am.

At Paya Lebar Methodist Girls' School (Secondary) (PLMGS), students will observe the sun through the 11 solar telescopes set up in the school's sky garden, led by vice-principal Albert Tan, an amateur astronomer.

A live feed from a telescope at PLMGS will also be beamed to more than 100 schools.

Elsewhere, significant numbers are expected to turn up at Science Centre Singapore, National University of Singapore and Labrador Park to view the uncommon phenomenon.

The Science Centre is providing the public with solar glasses for safe viewing of the eclipse, while at an event at Labrador Park, the Astronomical Society of Singapore is setting up solar-filtered telescopes for participants. 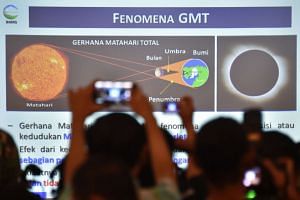 Solar eclipse on March 9: What you need to know and where to view it in Singapore 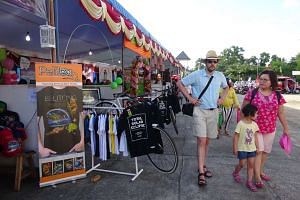 Solar eclipses take place when the moon crosses between the sun and the earth, forming a shadow on the earth's surface. Partial eclipses, as will be seen in Singapore, occur when a portion of the sun is obscured by the moon.

Overseas, at least 100,000 foreign tourists will gather at a dozen hot spots in Indonesia to catch a rare total solar eclipse. A total eclipse occurs when the sun is completely covered by the moon when viewed from the earth's surface, exposing a circular rim of light.

On the island of Belitung, off the east coast of Sumatra, Indonesia's President Joko Widodo will join some 7,000 locals and tourists to catch what has been touted as the country's biggest tourism highlight of the year.

Hotel rooms on the island were in hot demand in the months leading up to the eclipse. Mr Denny Walangitan, executive assistant manager of BW Suite Hotel, told The Straits Times that all its 202 rooms had been reserved from October last year.

"We had to reject 100 requests since because we couldn't meet the demand," Mr Walangitan added.

Dr Dhani Herdiwijaya, an astronomer from the Bandung Institute of Technology said the total eclipse will be special as the area it will pass over is very limited.

"This time round, it's specifically in Indonesia. It's a once in a lifetime experience; we can enjoy this 'totality' (where the moon fully obscures the sun) not just as a moment in time but as a scientific experience."