Despite working long hours as the sole breadwinner for her family of five, Madam Samsiah Halil, 53, cuts a cheery figure as she gathers her children for a photoshoot near her house in Bedok.

The security officer, who works 12-hour shifts five to six days a week, has been earning about $1,600 a month for her family of five since her husband passed away more than 10 years ago. She has four children: three daughters aged 18, 20 and 26, and a son, 12. The younger two became recipients of The Straits Times School Pocket Money Fund this year.

The pair are among the more than 10,000 supported by the fund each year. The fund, which provides children from lower-income families with pocket money for meals and transport, has been running for 17 years.

Her son, Lighthouse School student, Zainul Abidin Abdul Rashid, has a hearing disability and receives $60 a month from the fund.

Madam Samsiah is most worried about him and holds on to his pocket money as she is afraid he would be cheated.

Asked whether the financial assistance she currently receives is sufficient, Madam Samsiah said it is hardly enough. "What to do, I try my best. I cover here and there, cannot anyhow spend money."

"My sister and sometimes my neighbour also give some food, biscuits or rice during gatherings... My children also know our situation, and won't ask for much," she said at the void deck of her four-room flat. She is still still paying the mortgage on the flat.

Eldest daughter Nurrashidah Abdul Rashid, who also has a hearing disability, helps her aunt at a school canteen. This earns her about $600 a month, mainly for her own expenses. 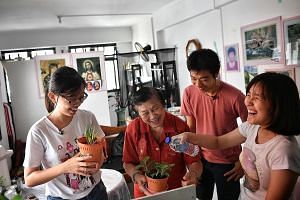 Madam Samsiah has modest ambitions for her children. "I hope they can read, write, use the computer, and have other skills to help them find a job in the future."

A version of this article appeared in the print edition of The Sunday Times on December 10, 2017, with the headline 'Single mum of 4 just wants her kids to have skills to secure jobs'. Subscribe
Topics:
More
Whatsapp Linkedin FB Messenger Telegram Reddit WeChat Pinterest Print Purchase Article Copy permalink