SINGAPORE - A hero is one who extends a helping hand not just to his own family, but also to the strangers around him.

Mr Sim Kwang Seng, 58, was moved when he saw a cleaner at a food centre give away hard-earned money to a disabled beggar and a handicapped busker.

So when he saw The Straits Times' call for entries to a competition prompting readers to write in with a story on their Singapore hero, he decided to share his story of the cleaner.

"I have never really spoken to him, but I often see him at the food centre. From the few instances that I've seen, he's so kind-hearted, I'm sure he has done a lot more," said Mr Sim who calls the cleaner "uncle", as he does not know his name.

Mr Sim was among the 25 winners who each won a pair of tickets to the National Day Parade (NDP) on Thursday (Aug 9).

"When you talk about heroes, you think of the high-calibre people," said Mr Sim, a retiree.

"This uncle must be over 60, and he can't walk steadily. But witnessing his kindness to others, it was quite amazing. 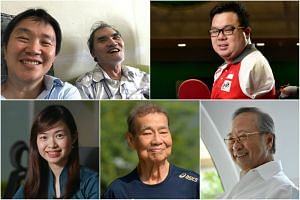 "It can be easy to be kind to family, but to extend that kindness to a total stranger, that's very different."

He had written about his mentor and friend Mr Richard Lim, who is in his 60s. The latter was a former drug addict who set up a shelter in Myanmar's northern Shan state that provides food, accommodation and education for orphans and underprivileged children.

Mr Yap said: "A true hero is any ordinary man who has the courage to shed his past and conquer the impossible.

"It hasn't been easy to sustain the shelter and any ordinary Singaporean wouldn't do that."

"I haven't told him that I wrote in and said he's my hero. But I think he will be happy to hear the good news," said Mr Yap.

Mr Yap intends to take his wife to the NDP. He said Mr Lim suffered a stroke about four years ago and has difficulties moving around, so he might not be able to attend the parade.

"One thing he taught me is that you never really live until you truly give," Mr Yap added.

Fellow winner, Mr Kiong Choon Meng, 62, who sells coffee beans at a market in Clementi, nominated founding Prime Minister Lee Kuan Yew as his hero, as under his care, the elderly saw progress in their lives.

He intends to give his tickets to an elderly couple from the nursing home where he volunteers.

"I'll bring them to the NDP and wait outside for them," said Mr Kiong in Mandarin. "I gave them a call earlier to tell them the good news, and they were very excited."