But one in four open to extremists sharing views online or at events, finds IPS report

Most Singaporeans are religious, but still frown on religious behaviour that could influence politics or disrupt social harmony, a new report by the Institute of Policy Studies (IPS) has found.

They also feel that having different religious views is no barrier to getting along when living in close proximity.

But the researchers noted that a sizeable proportion of people have no qualms about letting religious extremists publish their views online, or hold public meetings to talk about them.

When surveyed, one in four people said putting such views online is acceptable as long as they do not instigate harm against others, and younger respondents were even more likely to think so - possibly because of more liberal attitudes towards free speech among the young, the researchers said.

But the overwhelming consensus across all age groups is that it is unacceptable for religious leaders to incite hatred or violence against other religions.

The working paper's authors, however, noted there is a fine line between espousing extremist views that consider other faiths as enemies and making hate speech.

"How the Government navigates the desire by this significant segment of the population for freedom of speech pertaining to extremist views in future will be of interest,'' they added.

"Religion is an influential and powerful force, and seeps into multiple domains of public and private life," the authors said.

"Tracking the expansive reach and influence of religion is thus crucial in maintaining inter-religious harmony and surveying public sentiment in public policy." 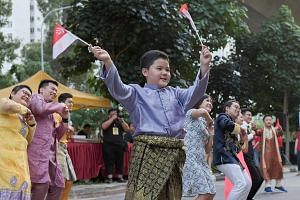 The four types of Singaporeans

A total of 1,800 Singapore residents aged 18 and older were surveyed for the local component of the international study.

Participants were asked about their religious beliefs and how these influence their views on issues such as public policy, religious harmony and infidelity.

Most also had at least some level of belief in life after death, heaven, hell and religious miracles.

On religious harmony, seven in 10 people said they feel people from different religious backgrounds can get along when living close together.

Even so, around 15 per cent of them said they found Muslims at least somewhat threatening. This was higher than for any other religious group.

When asked about religion and politics, most agreed religious leaders should not try to influence voting at elections or make remarks about politicians' characters.

Three-quarters also agreed the country's laws should not be based on a particular religion.

Religion was also found to influence people's views on moral issues such as infidelity, abortion and homosexual sex.

The younger and better educated respondents, as well as those with no religion, tend to have more liberal attitudes.