SINGAPORE - One hundred years ago, Singapore residents came together at Farrer Park Field to celebrate Singapore's centenary. On Friday (Aug 9), residents once again gathered at the former site of Singapore's first race course to celebrate the Republic's 54th birthday and to commemorate its 200th year.

The festivities kicked off with a parade consisting of 49 students from the Singapore Chinese Girls' School's Girls' Brigade, Girl Guides and National Cadet Corps uniformed groups. A drone workshop where participants tried their hand at flying the devices, photo opportunities with ponies and traditional food stalls were hits among the crowd.

An aquathlon involving around 250 participants aged between six and 55 was also held in conjunction with the celebrations.

"This year's National Day celebration at Farrer Park is extra special, as this was the place that hosted the Centenary Day 100 years ago in 1919," said Mr Melvin Yong, MP and adviser to Tanjong Pagar GRC Grassroots Organisations (GROs). "Much has changed since then and Farrer Park has witnessed many significant milestones in Singapore's history."

Farrer Park Field, besides being the former site of Singapore's first race course, was where many national footballers played in their youth, and was also used as a runway as far back as 1911.

Former national swimmer Ang Peng Siong, 56, who grew up in the area, was among those at the celebrations.

"It's great to have a sporting competition in Farrer Park on National Day, given the sporting history of the area, and it's a good way to remind the younger generations of our past," he told The Straits Times.

Former national footballer Razali Saad, 54, told the crowd that he was one of the youngsters who would be at the field as early as 7.30am on some days. It was where many footballers came to play and be noticed, he said. 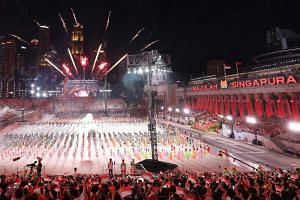 Resident Lynn Ong, 36, who was at Farrer Park Field with her husband and two children, said: "It's good fun for the kids, as they get to try out things like flying drones."

Mr Ghazali Syed, 43, who has lived in Farrer Park since his childhood, also brought his four children to the festivities. "We come for the National Day celebrations every year, and the kids enjoy the fun games and food stalls at the carnival," he said.

"Our whole history has been about facing challenges, overcoming them, going on to the next chapter and building a new future for the next generation," said Ms Indranee. "Going forward, we have hope for the future. Despite all the challenges that are ahead of us, we are a people that can overcome them."

She said that Singapore's 54th birthday was about celebrating its spirit as a nation.

"We are a small country, no resources, but what we have, most precious of all, is our people and our Singapore spirit."