Singaporean Amy Wong died of altitude sickness in Nepal last Friday (May 26). She was there to to take part in the Everest Marathon to be held on May 29.

Last year, a Singaporean man also succumbed to the sickness while climbing Stok Kangri in the western Himalayas.

Altitude sickness strikes when people ascend heights too quickly. The lack of oxygen and decreased atmospheric pressure cause headaches, fatigue and dizziness.

While some people suffer from mild symptoms, it can prove fatal for others.

Here's more about altitude sickness and how to prevent it.

1. What are the symptoms?

Besides headaches and dizziness, sufferers of acute mountain sickness (AMS) may experience insomnia due to lack of oxygen, nausea and loss of appetite.

People often say it is like suffering from a bad hangover.

The signs usually start about two to 12 hours after arriving at a high-altitude area.

Scoresheets for self-assessment are available. These questionnaires assign a score to each symptom according to its severity.

2. Why do some people die from altitude sickness?

For some people, besides experiencing discomfort, their lungs or brain fill up with fluid - both life-threatening conditions. 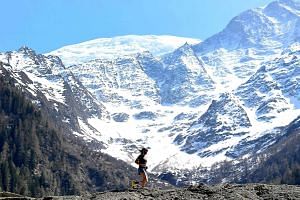 What to do when you're feeling low at high altitude

Fluid in the lungs limits the sufferer's ability to draw in more fresh air, he or she gets more breathless and short of oxygen, and can die within hours.

If fluid accumulates in the brain, one can become increasingly disorientated and even behave irrationally. The person can eventually fall into a coma and die.

3. Who gets altitude sickness?

It is hard to predict who is susceptible to altitude sickness. Extremely fit individuals could get it, and even experienced mountaineers suffer from it.

People who have previously suffered from altitude sickness are likely to encounter it again.

Certain factors can make a person more susceptible, including alcohol consumption, rapid ascension and strenuous activities such as skiing.

The best way to prevent AMS is to acclimatise to high altitudes by not ascending too quickly.

If walking, ascend no more than 500m to 1,000m a day. If taking a plane, stay overnight at an intermediate altitude.

The drug acetazolamide, also known as Diamox, speeds up the body's ability to get used to higher altitudes.

It can have side effects such as tingling fingers, frequent urination and a funny taste in the mouth.

Stop ascending if symptoms of AMS get worse while resting at the same altitude.

The best way to deal with AMS is to descend, but if that is not possible, a patient can be put in a hyperbaric chamber.

The pressure in the chamber can be controlled to simulate low-land conditions.

Besides acetazolamide, taking painkillers, resting and drinking plenty of water can help.