Singapore will promote stronger Asean-China cooperation during its chairmanship of the regional grouping next year, Prime Minister Lee Hsien Loong said at a meeting with Premier Li Keqiang yesterday, the first day of his visit to China.

Both leaders touched on Asean-China ties, and affirmed the progress made during Singapore's ongoing tenure as country coordinator for Asean-China dialogue relations, the Prime Minister's Office (PMO) said after the meeting.

PM Lee said he was glad for the opportunity for both sides to discuss how to work together for the regional context and for Asean, and hoped Singapore can make a contribution to bring Asean and China closer together.

Yesterday, PM Lee received a ceremonial welcome from Premier Li before their meeting at the Great Hall of the People.

They discussed regional developments, and expressed their deep concern over the heightening tensions on the Korean peninsula. 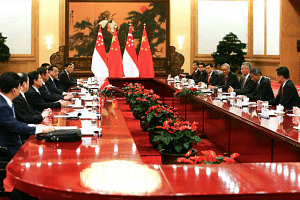 PM Lee said in a Facebook post after a banquet last night that the meeting was "fruitful", adding: "Will do our best to bring Asean and China closer together."