Water production at Singapore's desalination plants and local waterworks has been stepped up to meet demand here, after pollution in the Johor River led to the temporary closure of four water treatment plants along the river, including one in Kota Tinggi that is managed by Singapore.

The PUB said in a post on its Facebook page yesterday that water supply in Singapore will not be affected even though the Johor River Waterworks had to temporarily stop treatment operations at 11am last Saturday. This was after high ammonia levels were detected in the Johor River.

The stoppage disrupted the supply of water from the facility to Singapore and some parts of Johor. But the shortfall in Singapore has been accounted for by local production, added the PUB.

"Water supply in Singapore will not be affected as PUB had stepped up production at the desalination plants and local waterworks to meet demand," the PUB said.

The Johor authorities detected high levels of ammonia in the Johor River, from which Singapore also draws part of its water supply.

Malaysian newspaper The Star reported yesterday that Johor ordered a poultry farm and factory in the Kota Tinggi district that converts manure into fertiliser to shut down, after it was identified as the source of the pollution.

Johor's State Minister for Health and Environment Ayub Rahmat said the high ammonia was due to a factory that processes "chicken droppings", Bernama news agency quoted him as saying.

Johor, which is just north of Singapore, shut down its water treatment plants in Semangar and Sungai Johor last Saturday. The move cut water supply to 1.8 million people.

Johor residents in at least three districts, including the capital Johor Baru, neighbouring Kulai and Kota Tinggi, were affected by the shutdown, which was expected to last up to two days, Mr Jamaluddin Jamal, corporate communications head of SAJ Ranhill, a Johor government water-supply services company, said last Saturday.

He said the ammonia level of 2.75 parts per million (ppm) recorded late last Friday night stayed at the same level at 4.30pm last Saturday. This is much higher than the Malaysian Health Ministry's permitted level of 1.5ppm.

"This is not the first time high levels of ammonia have disrupted water supply. We have recorded three major incidents this year alone," The Star and Bernama quoted him as saying.

Mr Jamaluddin said that the situation could be prolonged if ammonia levels do not drop, adding: "We urge the public not to panic, and to use water wisely." 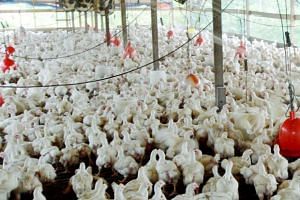 Johor Menteri Besar Mohamed Khaled Nordin said the state government's decision to close the poultry farm and factory was made after suggestions by eight agencies during a special meeting last Saturday.

Investigations by the eight agencies had linked the premises to the high ammonia content in the river.

The Johor River is a major source of drinking water for the state, with the river draining into the Johor Strait north of Pulau Ubin and Pulau Tekong. Singapore draws up to 250 million gallons of raw water a day from the river, under a 1962 agreement with Malaysia, which expires in 2061.