SINGAPORE - The Singapore Red Cross (SRC) is contributing US$150,000 (S$209,670) worth of relief supplies to flood-hit Tamil Nadu, the humanitarian organisation said in a press statement on Saturday.

The contribution is in partnership with its Red Cross partners in India, in view of the "dire situation in the states affected by the floods".

A team of Red Cross volunteers is on standby to be deployed in the next few days to help distribute the relief items.

The Singapore Red Cross also said in its statement that it had launched an urgent public appeal for funds to aid flood survivors. 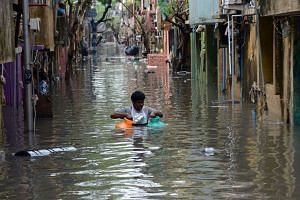 From Monday (Dec 7), the public can make donations at the Red Cross House at Penang Lane from 9.30am to 8pm on weekdays and 9.30am to 3pm on Saturdays and Sundays.

India on Sunday bolstered its flood relief efforts in Chennai, deploying hundreds of additional soldiers and relief workers amid criticism that it had been slow to respond to the crisis.

The runway at Chennai Airport was partly opened after being shut for the past four days, while large parts of the country's fourth-largest city have been inundated by up to 2.5m of water after torrential rains on Dec 1.

The current death toll across the state stands at 280.