Rise credited to tech infrastructure, skilled labour, ease for new businesses to be set up

Singapore has reclaimed its spot as the world's most competitive economy, an accolade it last won in 2010.

The Lion City jumped from third place last year to first, switching places with the United States, which slipped from top spot to third. For the previous four years, Singapore had hovered around the third or fourth place.

The ranking, by Swiss business school IMD, evaluates the extent to which a country fosters an environment where enterprises can achieve sustainable growth, generate jobs and increase welfare for its citizens.

In the report, which was released early this morning (Singapore time), Singapore's rise to the top was attributed to its advanced technological infrastructure, availability of skilled labour, favourable immigration laws and the efficient way in which new businesses can be set up here.

"When countries focus on a long-term vision rather than on short-term tactics, they improve the prosperity of their people," he said.

Meanwhile, Hong Kong held on to the second place, aided by a benign tax and business policy environment and access to business finance. 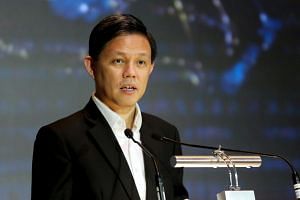 As for the US, the "initial boost to confidence from President Donald Trump's first wave of tax policies appears to have faded", according to the report.

While Washington still sets the pace for levels of infrastructure and economic performance, the competitiveness of the world's biggest economy was hit by higher fuel prices, weaker high-tech exports and fluctuations in the value of the dollar.

Looking ahead, Singapore must deepen its ability to help firms scale up, equip workers with the skills to thrive in a knowledge-intensive environment and create better local and international partnerships to access new markets, the report said.

Rounding up the list of the top five most competitive economies were Switzerland, which moved one place up to fourth, and the United Arab Emirates. It was the first time in the top five for the latter, ranked 15th as recently as in 2016.

Among countries in the Asia-Pacific, Indonesia showed the most improvement, leaping 11 places to the 32nd spot. This was due to increased efficiency in the government sector as well as improvement in infrastructure and business conditions. It also had the lowest labour cost across the 63 economies.

Thailand, driven by a rise in foreign direct investments and productivity, advanced five places to rank 25th this year, while Japan fell five places to the 30th spot, hampered by a sluggish economy and government debt, among other things.

Venezuela remained at the bottom, hit by inflation, poor access to credit and a weak economy, the report noted.