Singapore has been re-elected to the council of the International Civil Aviation Organisation (ICAO) at the global aviation agency's ongoing assembly in Montreal.

The Republic got the highest number of votes - 165 out of 167 votes cast - last Saturday in Part 2 of the election to the council, according to results announced by ICAO.

Coordinating Minister for Infrastructure and Minister for Transport Khaw Boon Wan, who led Singapore's delegation to the ICAO assembly, said it was honoured to be re-elected to the council and by the support of fellow ICAO members.

"We will continue to contribute actively to the advancement of the ICAO's mission," Mr Khaw said in a statement issued by the Ministry of Transport (MOT) yesterday.

The council is the governing body of ICAO, a specialised United Nations agency which governs civil aviation. The ICAO council comprises 36 members which are elected every three years.

Singapore was first elected to the council in 2003 at an extraordinary assembly session that was convened to fill three new seats. It was re-elected in 2004 and in subsequent elections at the assembly sessions held every three years.

Voting to the ICAO council is conducted in three stages. The first two were held on Saturday and Part 3 will be held tomorrow.

Part 1 is for states of chief importance in air transport, and 11 countries were elected: Australia, Brazil, Canada, China, France, Germany, Italy, Japan, Russia, the United Kingdom and the United States.

Part 2 is for states which make the largest contribution to the provision of facilities for international civil air navigation, and Singapore was among 12 countries elected. 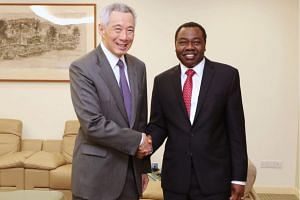 Part 3 of voting is for states that were not elected in the first two stages, and seeks to ensure that all major regions are represented on the council.

Singapore holds leadership positions in around 20 of these groups.

Mr Khaw explained the importance of Singapore's active participation in ICAO in a Facebook post. "Aviation is important to Singaporeans and many enjoy good jobs in this sector. That's why we participate actively in ICAO to ensure a level playing field in global aviation," he said. "Every three years we campaign to be elected to ICAO Council so that we can better protect our interests."

The aviation sector accounts for about 6 per cent of Singapore's gross domestic product and supports more than 160,000 jobs.

The Government also offers a significant number of fellowships jointly with ICAO to civil aviation officials to attend these programmes.

Said the MOT: "Singapore has created numerous platforms for aviation leaders and experts to exchange views and formulate new ideas to advance international civil aviation, through the SAA and its partnerships with other leading international aviation organisations and academic institutions."