The sugar is processed right here in Singapore at the Cheng Yew Heng Candy Factory in Senoko, where it was first turned orange in the 1950s. The company started out producing preserved fruits and Chinese candies in 1947.

The 15th edition of the Singapore Heritage Festival will take participants on a tour of the home-grown company to learn about the production process and "how the company manages to hit that sweet spot between tradition and change".

Visitors will get to see how the company's workers crystallise liquid sugar and how the third-generation business has developed new products such as rock sugar sticks in flavours like the Singapore Sling to keep up with the times, said its director John Cheng, 36.

"We are happy to open up our factory for the first time for the public to learn more about the family business," said Mr Cheng.

The company is one of the biggest suppliers of refined sugar here, with 60 per cent of the market share, and the only rock sugar manufacturer in Singapore.

The tour of Cheng Yew Heng, which has been based in Jurong for most of its history, will take place on April 7. It reflects the spirit of this year's festival by the National Heritage Board which zooms in on Singapore's industrial heritage.

The festival, which will run from April 6 to 22, will focus on taking participants through Jurong and Jalan Besar for the first time.

There will also be guided tours of Jurong Town Hall - a symbol of Singapore's successful post-independence industrialisation programme. Sited on a hill, the futuristic building, reminiscent of a ship, was gazetted a national monument in 2015 .

The monument will host an immersive roving performance by theatre group Sweet Tooth that takes visitors through the Jurong story with music, song and storytelling. Visitors will get the chance to interact with characters of Jurong's past. They include a rubber plantation worker and a soldier. 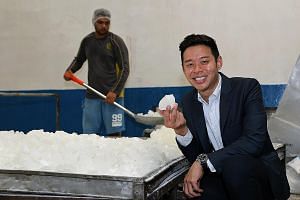 Hitting the sweet spot for change and tradition

The public can also sign up to watch a movie at a drive-in cinema reminiscent of the Jurong venue in the 1970s.

The festival also aims to showcase the eclectic mix of businesses and creative entrepreneurs in Jalan Besar. The programme includes guided architectural and food tours, and a market showcasing local talents including artists, designers and craftsmen.

Festival director Angelita Teo said: "Over the past 15 years, the Singapore Heritage Festival has grown into a community-led event that Singaporeans are proud to call their own.

"This year, we are encouraged that passionate individuals and partners have stepped up and taken on a greater role in organising key highlights, such as in Chinatown and Jalan Besar, demonstrating that the festival is truly a festival by the people, for the people."

Most programmes are free and open to the public. Online registration for ticketed activities starts on Wednesday (March 28). Visit www.heritagefestival.sg for more information.