SINGAPORE - From some 30 internationally-acclaimed garden and floral designers to an award-winning local movie director.

These are just some of the people who will work together to dazzle visitors at the Singapore Garden Festival (SGF) from July 21 to Aug 3.

For the first time, Singaporean filmmaker Royston Tan will be working with Gardens by the Bay on the Orchid Extravaganza floral display in the Flower Dome.

Mr Tan, 41, who is known for his movies such as 15 and 881, will be providing the creative concept and direction for the display.

Show garden designers will also be displaying their talents at the SGF. Among them are Briton Andy Sturgeon and Australian Jim Fogarty, two renowned designers who are familiar faces at the SGF.

Mr Sturgeon will be taking part in the festival for the fourth time, and Mr Fogarty, the fifth time.

Mr Sturgeon won a gold medal and the best in show award at the prestigious RHS Chelsea Flower Show in the United Kingdom in 2016.

Mr Fogarty is one of the top landscape and garden designers in Australia. His landscape designs have clinched over 30 awards. 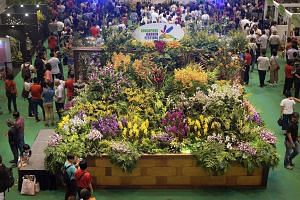 The two designers will be collaborating for the first time to create a visual masterpiece at the SGF.

American husband and wife pair Emily and Mark Cook will be taking part in the festival for the first time.

They have been landscape designers and horticulturists for 17 years. They clinched a gold medal and the best in show award at the Philadelphia Flower Show last year.