As of 12.01am Tuesday, those driving Singapore-registered cars to enter Malaysia at the two land checkpoints including the Second Link will have to pay a new RM20 (S$6.60) levy, called a road charge.

When The Straits Times visited the Johor Baru immigration checkpoint at 1am on Tuesday morning, the road charge was already in effect. Signs were prominently posted at various places at the checkpoint reminding visitors about the road charge.

Those travelling into Johor via the land checkpoints will now have to tap their stored-value Touch n' Go cards twice after getting their passports stamped, once for the road charge and again for the checkpoint toll.

There are two separate payment terminals at each counter for both charges, with signs indicating what each terminal is for.

Traffic was heavy at 1am, with both Singaporean and Malaysian-registered vehicles heading into Johor. But this did not seem to be related to the new charge. Motorists did not appear to be confused or surprised by the implementation of the new charge.

Technical officer Kamsan Amin, 58, who travels to Malaysia every week from his Woodlands home to buy groceries, was prepared to pay the road charge and said it is affordable.

"It is still cheaper on a whole, as compared to buying groceries in Singapore. I've been coming into Malaysia for about 20 years now and I don't think I will stop just because of the extra charge," said Mr Kamsan, who spends about RM100 on groceries each trip.

Another motorist, Mr Iskandar Samat, 42, was also unfazed over paying the additional charge. He visits Johor Baru once a month with his family to shop and eat, and was with his mother, Madam Sabariah Tik, when he spoke to The Straits Times.

"RM20 is still a comfortable rate for me. It is nice for us to take a day trip to JB as a family now and then," said Mr Iskandar, who is self-employed.

"With the year-end holidays coming up, I think I will be back a few more times this year with my wife and two children (aged 13 and 15 years old)."

However, technician Jani Jamari, 57, shared that he is having second thoughts about making the trip across the Causeway in the future. He was seen calculating on a piece of paper the total cost of a trip to and from Malaysia.

He said: "I come in about once a month on my day off to eat because the halal food is cheap and good. Now, I think it's not worth it to spend about S$19 on the toll and road charges here and back.

"I may take a ferry to Batam on my day off instead."

Malaysian Transport Minister Liow Tiong Lai had announced on Facebook last Friday that the road charge would be collected.

The fee is on top of existing checkpoint tolls levied by both countries, which currently amount to about $13 for a round trip for a Singapore car going into Johor.

The launch of the road charge has been repeatedly delayed, and was targeted to roll out as early as October last year .

The Malaysian Transport Ministry said that officers from the Road Transport Department would be deployed on Tuesday to assist drivers.

There will also be Touch n' Go officers onsite to help drivers who have insufficient value in their cards, the ministry added.

Singapore's Ministry of Transport said in a statement on Friday that it would match the road charge "in some form" if the levy is found to discriminate against Singapore-registered vehicles. 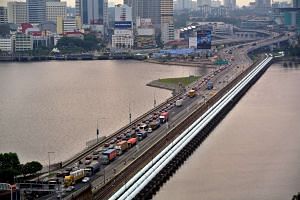 Malaysia to collect RM20 road charge from foreign vehicles entering Johor from Nov 1; S'pore to 'match it' if move is discriminatory

Datuk Seri Liow told reporters the following day there would be no discrimination.

"We will impose the road charge not only at our border with Singapore, but also our borders with Thailand, Brunei and Indonesia with a similar charge of RM20 per car," he was quoted as saying in a Bernama news report.

Government and commercial vehicles, including those for public transportation, will be exempted from the levy.

Users will be charged a one-time fee of RM10 (S$3.30) to install a radio frequency identification (RFID) electronic chip which is valid for five years. A total of 144,000 vehicles had registered for the VEP as of July this year (2016).

Datuk Seri Liow said the start date of the VEP will be announced closer to the launch. He added it would eventually apply to the other 10 road entry checkpoints into Malaysia, from Thailand, Brunei and Indonesia.