SINGAPORE - The need for Singapore and Japan to work more closely together to address crucial developments amid global uncertainty, as well as learn from each other in tackling issues common to both societies was underlined by both nations on Thursday (Oct 10).

One key area with lessons for Singapore is Japan's ageing society, which the Republic will similarly have to face in about 15 years' time, said Prime Minister Lee Hsien Loong.

Speaking at a dialogue to mark the 50th anniversary of the Japanese Chamber of Commerce and Industry in Singapore (JCCI), he said: "We are looking carefully at all the things you do, all the technology you've invented. Devices for old folks, spoons and forks which old people can use, machines to give old people showers.

"All sorts of very clever devices that make life more pleasant and more practical for people."

PM Lee was responding to Mr Takehiko Koyanagi, of financial publication Nikkei Asian Review, who was moderating the dialogue at the National University of Singapore's University Cultural Centre.

He also said Singapore needs to learn how Japanese companies have adapted their practices to cater to older people in the workforce.

"Your companies have been very good at adjusting the jobs, the requirements, even the technology, so that old people can be productive and keep on working. We need to do a lot of that."

The Prime Minister also lauded Japan's cohesion in times of crisis, as seen in its response to natural disasters such as the 1995 Kobe earthquake and the 2011 Fukushima earthquake and tsunami that led to an accident at a nuclear power plant.

Japan's ambassador to Singapore, Mr Jun Yamazaki, noted in his speech the progress made in the relationship between the two countries since the post-war period, when it was "tense". 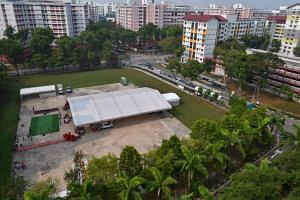 New vertical 'kampung' to be built with flats for elderly

New study on seniors aims to help them age well

"Despite the difficult situation, investments and technology transfer from Japan grew steadily after that time. This growth of Japanese investment in Singapore has resulted in Japan being the top Asian investor in Singapore today, in terms of FDI stock," he said, referring to foreign direct investment.

Moving forward, both countries need to work "even closer together" to deal with global issues like climate change, he added.

He puts its low birthrate partly down to the increased education levels of women here, with many pursuing careers.

"If they are working, they will have to assess the impact on their careers and whether they can manage their children and work at the same time," he said. "I can well understand that this is not easy to achieve."

He said the Government has been trying to "make it easier to be a mother in Singapore", by promoting flexible employment practices and improving the infant care and pre-school childcare sector.

On the global front, PM Lee said: "We are concerned with the direction things are going."

Besides the large increase in China's exports to many countries, there are also major changes within each country, he noted.

THE BIG STORY: More needs to be done in Singapore to tackle ageing population | The Straits Times

Referring to the United States, he said its coal mines were not wiped out because of Chinese exports of coal to America.

"The Chinese are not exporting coal to America, but the Americans are fracking and producing natural gas, and that is what is making the coal mines uneconomic and therefore the coal miners lose their jobs.

"These are very powerful technological changes, which are continuing. People don't fully understand them, but they feel the impact, and they blame it on something.

"So (US President Donald Trump) doesn't say that he's against free trade. He says he is for free, fair and reciprocal trade, but what exactly does that mean? Well, that depends on how his trade negotiators carry out their mandate," PM Lee added.

On China, he said it is necessary to recalibrate the terms on which it is engaging in the global economy.

When it entered the World Trade Organisation in 2001, its trade was around 4 per cent of world trade, but that is now about 13 per cent, he noted.

"So the concessions which countries made to them in 2001, today become no longer politically sustainable because the impact is so much greater."

In line with its growth, the trade terms have to be recalibrated and this means things like intellectual property "that needs protection for the market, that means the rules which they are able to abide by and commit to", he said.

PM Lee added: "These are adjustments which have to be made by China, partly to maintain some relations with other economies, but partly because it is in their own interest as they develop, to adjust policies to the status of their development.

The JCCI, which has about 820 member companies, aims to promote trade and investments between Singapore and Japan, along with cultural and social development.