BY SEVERAL counts, Singapore is a global city and does not need to advertise itself as one, academic Parag Khanna has argued.

At The Straits Times Global Outlook Forum last Friday, he said Singapore fulfilled many of the characteristics of a global city, which to him is one that is stable, wealthy, diverse, connected, creative and a role model for others.

The rise of global cities was a topic that Dr Khanna, director of the Hybrid Reality Institute and senior fellow at the Singapore Institute of International Affairs, spoke about at a lunchtime talk at the forum.

He also touched on megatrends such as the devolution of power and the rise of regionalism, and how these impacted on Singapore.

On Singapore’s qualification as a global city, he noted that it has a diverse demographic. With foreigners making up a third of its total workforce, the city state is second only to Dubai in terms of the percentage of foreigners in its population.

Also, as a wealthy city, Singapore plays a key role in the international financial sector. It was chosen as the first offshore yuan hub outside China in May, and has over $28 billion in yuan deposits to date.

In June, consultancy PricewaterhouseCoopers (PwC) predicted that Singapore would overtake Switzerland and London as the world’s top wealth management centre by the end of this year.

And in a nod to the social, political and economic stability that Singapore offers, a PwC study last year ranked Singapore as the most liveable city in Asia, mainly due to the ease of doing business and efficient infrastructure.

However, Dr Khanna said there was no need for Singapore to advertise itself as a global city.

“You don’t see in New York (the label) ‘New York: Global City’, nor do you see that in London, because they are global cities. If you are a global city, you don’t need to brand yourself as one.”

Singapore’s drawback is that it is a CSI – City, State, Island – with no sprawling countryside retreats for those who need to escape congested city life, unlike most other global cities belonging to countries.

He acknowledged the tensions between Singaporeans and their Government over the rapid expansion of the city’s population to ensure economic growth, but said he would not suggest going back in time to undo what had already been done.

Rather, “the goal tomorrow is to allow everyone to benefit” from the growth achieved.

“Just because Singapore is not letting in people as fast (as it used to), that is not a measure of how global a city Singapore is. It’s how well you serve all its constituents while also being global,” he said.

As for what the optimal population size of Singapore should be, Dr Khanna said it was “not unimaginable that seven or even eight million people could live here productively” in the next 10 to 20 years.

But he also envisions a “much more physically evolved Singapore where towns play a stronger role” as laid out in the 2013 Urban Redevelopment Authority Draft Master Plan.

It would be where “not everyone is going down to Orchard Road or the Central Business District every single day”. He described the future Singapore as “a city of villages”.

During his speech, Dr Khanna observed the trend of devolution worldwide. This is the transfer or delegation of power to a lower level, such as from central government to local or regional administration.

In the United States, for instance, President Barack Obama’s administration is seen to be ineffective because of debacles such as the foul-ups with the launch of the health-care programme and the recent government shutdown. 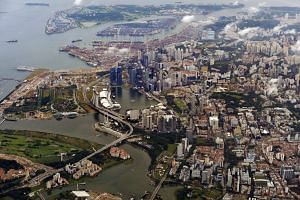 Cities such as New York realised they could no longer count on Washington to carry out policies effectively and have begun to pursue their own immigration and foreign commercial policies.

At the same time as the tendency towards devolution of power, there is also the move towards regionalism, helped by the success of, say, the European Union.

The euro zone has proven resilient in the face of its economic crisis. There is now talk of greater integration with a fiscal compact and a banking union.

Possibly taking a leaf from the EU, regional mechanisms are spreading and deepening worldwide.

There are now several regional organisations, such as the East African Community, the African Union, the Union of South American Nations, the Gulf Cooperation Council and, closer to home, Asean.

As a “nimble player of multi-alignment” and the “capital of Asia”, Singapore needs be a role model and play a more assertive leadership role in the region, he argued.

In the case of the territorial disputes in the South China Sea between China and a few Asean nations, for example, Singapore could play an active role to resolve the conflict.

It could set up a Singapore-listed company, managed by the respective littoral states’ national energy companies which would share responsibilities for approving exploration projects and sharing profits, he said.

“I propose that this is an opportunity for Singapore to play a neutral role as a commercial arbiter to transform the dispute from one that is legal, territorial and nationalistic and therefore in many ways unresolvable, towards one that is commercial and cooperative.”