'Old friends', performers across generations perform familiar songs - and a new one

From original singers of National Day Parade (NDP) classics to those making their debut, performers across different generations will join voices with audiences in sing- alongs at this Sunday's parade.

The parade will open with a medley of NDP classics such as Stand Up For Singapore, Count On Me, Singapore and We Are Singapore, sung by original singers such as Robert Fernando, Clement Chow, Jacintha Abisheganaden, Dawn Yip and Douglas Oliveiro.

For jazz singer Abisheganaden, 57, whose last parade performance was an a capella version of We Are Singapore in 2008, this year's show is a homecoming of sorts.

"The last time I was up there singing, the focus was on the voices and instruments. This time, I'm part of a team with my old friends, and we're doing happy-go-lucky, sing-along versions of the songs. It's a lot of fun," she said. 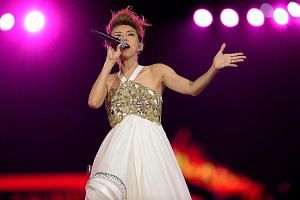 No place like home for Stefanie Sun and Kit Chan

Local pop quartet, The Sam Willows, will then serenade the crowds with a folk-flavoured take on the 1998 NDP hit Home, backed by the band's signature vocal harmonies. This is the band's first showing at the NDP.

"Home is one of those songs which is everybody's favourite. Everybody grew up listening to it. We feel a certain sense of responsibility to make sure we don't screw it up," said guitarist Jonathan Chua, 24.

Penned by veteran musician Dick Lee, Home was voted by readers of The Straits Times in 2013 as their favourite NDP song.

Mandopop stars Stefanie Sun and JJ Lin will also feature in the show. Sun will perform a medley of two NDP songs, We Will Get There (2002) and One United People (2003), while Lin is the penultimate act with this year's theme song Our Singapore, also composed by Dick Lee.

Singaporean singer-songwriter Corrinne May, 42, will perform her own composition, the 2010 NDP theme song, Song For Singapore.

May, who travels often between here and Los Angeles, said: "The performance is the best part of the NDP for me. There's this palpable sense of love for the nation when you're right there with everybody else... when you're part of something that's bigger than yourself."

The parade's music director, Dr Sydney Tan, said this year's music "is more formal and dignified in instrumentation and feel to celebrate how far we've come and look forward to the future".

"But this year has two extra dimensions of emotional depth - our 50th year of Independence and the passing of our founding Prime Minister... we do not need to be bigger and better for the sake of it, but to move the average Singaporean who is watching the parade live or at home on TV."

Singer Kit Chan will wrap up the evening with her version of Home, which she first performed at the 1998 parade. Chan, 42, told reporters after last week's preview show that this year's parade will "likely be her last", as she wishes to end off in the year of the Golden Jubilee.

"When I sing Home, I always feel like many people are singing along with me. So I don't feel alone," she said.

Doctoral student Yee Zi Han, 28, who attended the preview show, agreed with the decision to bring back the NDP classics and their original singers. "The entire show was nostalgic for me, and it brought back fond memories of watching and participating in the parade as a primary and secondary school student."

A version of this article appeared in the print edition of The Straits Times on August 04, 2015, with the headline 'Sing along to NDP classics with their original singers'. Subscribe
Topics:
More
Whatsapp Linkedin FB Messenger Telegram Reddit WeChat Pinterest Print Purchase Article Copy permalink