The number of complaints against retailers at Sim Lim Square has plunged in the wake of the infamous Jover Chew cheating case.

There were 26 complaints against shops at the Rochor Canal mall from January to November, a far cry from the 107 received by the Consumers Association of Singapore (Case) last year.

What is more, most of this year's complaints were about defective goods instead of misrepresentation, said Case executive director Seah Seng Choon.

However, the mall, long seen as a hub for electronic gadgets such as laptops and mobile phones, has also seen a big drop in customers.

TARRED WITH THE SAME BRUSH

One person was cheating, but the whole building is suffering a bad reputation.

RETAIL ASSISTANT MOHAMAD SAIFUDEEN, on how Jover Chew and his staff have given Sim Lim Square a bad reputation

MR RAYMOND NG, who has been working for a camera shop at the mall for more than 20 years, on the change in fortunes

And shop owners are pointing their finger at Chew, the shop owner sentenced to 33 months in jail and fined $2,000 last month for coercing customers into paying inflated prices for phones and in-house warranties.

Four of Chew's staff at the shop - Mobile Air - were sentenced to between four and 14 months in jail.

"One person was cheating, but the whole building is suffering a bad reputation," lamented retail assistant Mohamad Saifudeen.

He works at Firdouse Electronics, which for the past 21 years operated from a fourth-storey unit. But three months ago, its owner decided to move into the first-storey unit previously occupied by Mobile Air.

The unit's rent had been slashed after it was left empty for months, and that was why his boss decided to move in, said Mr Saifudeen. But with little footfall, the shop has started selling products online and delivering them to homes.

Many of those working on the second storey share similar stories of poor business.

"Last time, the crowds will squeeze their way in. Now, it's very quiet. Business has dropped by half," said 29-year-old sales assistant Tommy Liu, who works at mobile phone shop Kata Store.

"Before, there was a constant flow of customers on weekends. Now the number of customers on the weekend and weekdays is the same, no more tourists," said Mr Raymond Ng, who has been working at a camera shop on the ground floor for more than 20 years. 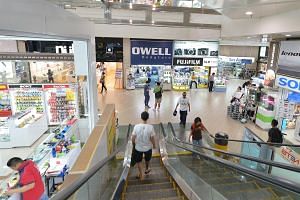 Tourists told to 'be careful or avoid going to mall'

Some hardware and repair shops on the higher floors have taken a similar hit. But salesmen at stores of more established brands, such as Asus and Dell, said their business has not been affected.

The 33-year-old Chew shot to infamy last November when a video of a Vietnamese tourist begging for the return of his money went viral.

The tourist had paid $950 for an iPhone 6, but was told by Mobile Air staff that he had to pay $1,500 more in warranty fees or lose both the mobile phone and his initial payment. Mr Pham Van Thoai went on his knees to plead with Chew.

His story made headlines in Vietnam, and newspapers warned citizens to be wary.

A month before that, Chew had been in the spotlight for refunding a woman from China $1,010 in coins that weighed up to 18kg.

After that, China's Ministry of Foreign Affairs put up a notice on its website highlighting incidents of fraud at the mall, and also warning Chinese citizens to be more careful.

When The Sunday Times visited the mall twice last week, there appeared to be no more than 60 shoppers spread across seven floors. Shop assistants mostly sat chatting with one another or tinkering with their mobile phones.

They wished that the police had clamped down on Mobile Air's tactics sooner. Even before the video went viral, they said, police would often visit Mobile Air to look into complaints.

Many shopkeepers, such as Mr Abdul Kadir, a 57-year-old moneychanger who has been at the building for more than 20 years, hope that over time, people will get over their misgivings about its shops.

"I hope the customers will come back and give this place its old shine," he said.

Mr Ng, who said he has not seen any police presence at the mall in recent months, felt this showed that dubious retailers have either been weeded out or are moving away from hard-sell tactics.

"It is more peaceful now," he said.

The opening of the Downtown Line 2 on Dec 27 is also igniting their hopes of better business.

A covered walkway will connect the line's Rochor station to the mall.

A Sim Lim Square spokesman said the mall has lined up a series of promotions, such as lucky draws, to coincide with the line's opening.

The mall is also in the midst of training sales staff and revamping its STARetailer scheme, which recognises reliable businesses that have fair trade practices.

"It'll take a while for business to recover. But the negative period is past, and now we are moving forward," said the spokesman.

Dr Dianna Chang, a marketing lecturer at SIM University, said the mall's management should work more closely with the authorities in weeding out errant retailers.

It could also be more proactive in advising customers, both local and foreign, by providing information in different languages.

"Many consumers still love the bargains, the scale, and the atmosphere at one-stop malls like Sim Lim Square."

A version of this article appeared in the print edition of The Sunday Times on December 06, 2015, with the headline 'Business plummets despite plunge in number of complaints'. Subscribe
Topics:
More
Whatsapp Linkedin FB Messenger Telegram Reddit WeChat Pinterest Print Purchase Article Copy permalink