For the past seven years, the managing director of home-grown brand Heatwave Shoes has organised annual mobile eye clinics for poor communities living in remote regions of the Himalayas.

Together with a team of medical and non-medical volunteers, the 33-year-old traverses hard-to-reach mountainous regions to provide basic healthcare checks.

Ms Tan's journey began in 2010, when she volunteered to teach English in Zangla, a remote village in Ladakh, India.

"Every day, students and villagers would ask me if I had various medications," she said.

Because of the high altitude, the villagers are constantly exposed to harsh rays from the sun, resulting in unusually high rates of cataract and other UV-related problems.

She returned to Singapore and spent six months organising a mobile eye clinic called Sight To Sky (STS). In 2012, she took a team of three doctors and nine volunteers to Ladakh. On that trip, they saw more than 1,200 eye patients. 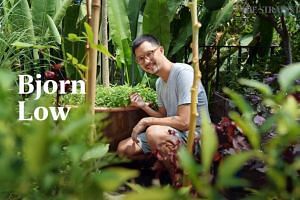 Kenneth and Adeline Thong: They share their home with young people in need

Since then, Ms Tan has organised a mobile medical clinic every year. During these missions, the group treats about 1,000 to 1,500 people.

STS, which became a charity in 2015, now also offers dental services as well as consultations for women's health issues.

Ms Tan, who graduated from the National University of Singapore with a degree in history, is also a successful entrepreneur, growing her father's shoe business from two local stores into an international chain of 50.

"Handing out a pair of glasses is a very small thing. It is something we take for granted. But it has changed the lives of our patients forever," said Ms Tan, who has a seven-year-old daughter.

She remembered a 12-year-old girl who had severe myopia and could not go to school. "She had never gone for an eye screening. Instead, people thought she had a mental disorder."

The child was prescribed a pair of glasses. "When she put them on, her eyes lit up. For the first time in her life she could see clearly," said Ms Tan. "That was a very big realisation for everyone in the clinic, that she simply could not communicate that she did not see well."

She said STS aims to reach more remote communities. Plans are under way to build a permanent eye clinic in the Ladakh area.

A social entrepreneurship programme is also being rolled out to equip youth from the villages with basic optician skills. They will be supported with a start-up pack and funding to give mobile eye screenings and prescribe glasses for others in the village.

Ms Tan hopes to inspire others to give. "You realise that there is always someone who needs more help than you. And no matter what your position in life, you can still make a difference."

A version of this article appeared in the print edition of The Straits Times on November 26, 2018, with the headline 'Sights set on eye care for the needy in Himalayas'. Subscribe
Topics:
More
Whatsapp Linkedin FB Messenger Telegram Reddit WeChat Pinterest Print Purchase Article Copy permalink