Passenger ships on international voyages must comply with standards set by an international maritime safety treaty called the International Convention for the Safety of Life at Sea (Solas).

Rules include having clear directions on what to do in the event of an emergency - from telling passengers their muster stations to how to don lifejackets. These have to be expressed through illustrated instructions in appropriate languages, and must be conspicuously displayed.

The country that the ship is registered with is responsible for ensuring that it complies with these rules.

The Maritime and Port Authority of Singapore (MPA) told The Sunday Times that it conducts regular inspections on all ferries entering and leaving Singapore. 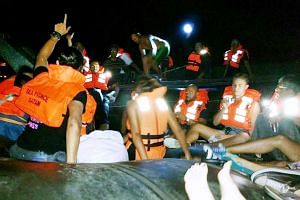 Safety of ferry passengers under scrutiny

Its officers check the documentation of the ferry and its crew to ensure that it is seaworthy and that the crew members are trained. They also physically inspect emergency equipment such as lifebuoys, lifejackets, life rafts, line-throwing appliances, the general alarm and public address system. 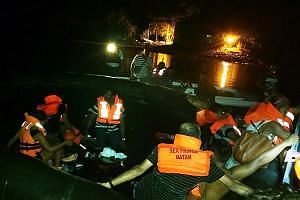 They also check that the number of lifejackets provided is consistent with that stated in the Passenger Ship Safety certificate, and test that the whistle and lights are working.

Checks also include ensuring that ferries have enough life rafts for passengers and they are serviced at least once a year. The servicing has to be carried out at an approved service station in the country or state that the vessel is registered with.

The MPA relies on the certificate issued by the life raft servicing company as evidence that they are in good condition, said a spokesman.

"Ferry operators are required to ensure the proper rectification of any deficiencies when these are found," she added.

The MPA launched a Safety@Sea campaign last year to increase awareness of safe practices at sea.

It also set up a National Maritime Safety at Sea Council in August to lead the push for maritime safety and work with other countries in the region. Over the last few years, the MPA has held safety briefings and workshops for regional ferry operators and their masters and crew.

It also carries out regular emergency preparedness exercises on scenarios, including ferry mishaps and rescue of passengers.