Minister for Law and Home Affairs K. Shanmugam has responded to a Facebook user's comment that he would like to throw an egg at the minister, adding that he had "laughed it off" when he was told of it.

He also called the comments "the somewhat exaggerated words of a young man", in a Facebook post published yesterday.

"I was then told about some of his background, and that he would be interviewed to establish that he is not actually going to take any action," said the minister.

"I understood police's concerns. I can laugh off these comments, but understandably, police can't."

Mr Shanmugam added that he is much more concerned about Facebook user Edmund Zhong's attitude towards narcotics. "I hope he does not actually experiment further with cannabis, regardless of how desirable he thinks drugs are."

Mr Zhong, in his Facebook profile, calls himself an "advocator" at Singapore Cannabis Awareness, a Facebook page that says its goal is to "raise awareness of the productive uses of cannabis in Singaporean society".

On Tuesday, Mr Zhong told The Straits Times his egg comment was meant as a joke and he did not intend to carry it out. "I posted it just as a joke, based on the news on the Australian senator," he said, referring to Mr Fraser Anning. Senator Anning, who had blamed the Christchurch mosque attacks on Muslims, was hit with an egg on his head by a teenager at a Melbourne event earlier this month. 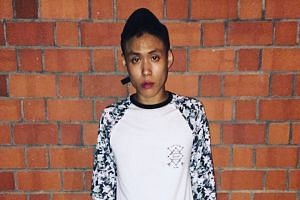 'It was a joke,' says man who suggested throwing egg at Shanmugam

Mr Zhong then wrote on Channel NewsAsia's Facebook post on Mr Anning: "I wanna do that to K Shanmugam. I swear."

A police report was made against Mr Zhong for the comment. He and a 47-year-old man are assisting in police investigations for the offence of communicating an electronic record to incite violence under Section 267C of the Penal Code, the police said on Monday.

The older man had responded to Mr Zhong's comment with information on the minister's upcoming Meet-the-People Session.

Under Section 267C, anyone found guilty of inciting violence faces a fine and up to five years in jail.