SINGAPORE - The year 2017 brings with it a bumper crop of seven long weekends.

Of the 11 gazetted public holidays released on Tuesday (April 5), seven fall on a Friday, Sunday or Monday.

Here's a quick guide to public holidays in 2017, and how to maximise those long weekends:

First off, the dates to mark in your calendar are: There are seven long weekends, but it's possible to make it 10.

If you're looking a short break in the region, one of the following three-day weekends will do. 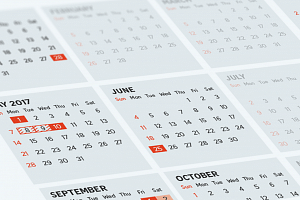 May: Labour Day (May 1) falls on Monday.

September: Hari Raya Haji (Sept 1) is on a Friday

December: Christmas (Dec 25) is on Monday.

But for a longer trip, you can create five-day "weekends" by taking two days of leave in May, August, or October.

3. JUST BEAR WITH IT

February, March, July and November are the "dry" months with no public holidays.

It will be easier to plan your leave from now on.

From 2016, the Deepavali date was not subject to change, according to the Ministry of Manpower.

In the past, the date for Deepavali was estimated in March or April of the previous year, and confirmed against the Hindu Almanac when it was available in the early part of the year.

Next year's seven long weekends are above average, but still can't beat the Jubilee year's exceptional windfall of an additional public holiday and two four-day weekends.

Not counting Polling Day, there were already seven long weekends in 2015. In addition, Aug 7 was declared a one-off SG50 public holiday, extending the National Day weekend to four days.

Chinese New Year fell on Thursday and Friday, which made it another four-day weekend.

In 2016, there were six long weekends, with three still to come.

In 2009, there could have been eight long weekends, but the date for Deepavali was later changed from Nov 15, Sunday, to Oct 17, Saturday.

Perhaps Singapore workers treasure their long weekends because on the whole, the number of public holidays here fall short when compared to other countries.

Travel search website Wego reported last year that India has the most number of public holidays at around 21. Some states have even more.

The Philippines has 18, China and Hong Kong 17, Thailand 16 and Malaysia and Vietnam have 15.

Taiwan and South Korea have 12 and Australia and New Zealand have 10.

But some countries have even fewer public holidays, like Germany with nine and Spain and Canada, which have only eight.