SINGAPORE - The Malay/Muslim community here can play their part in building Singapore's shared future under a series of engagements to get their views on issues affecting them and the nation, said Minister-in-charge of Muslim Affairs Masagos Zulkifli on Sunday (July 21).

He said his team of fourth-generation Malay/Muslim leaders have been charting the way forward, but they also need the community to work with them to do so.

Earlier this year, Deputy Prime Minister Heng Swee Keat had said that the Government will partner Singaporeans in new ways to design and implement policies together.

In his speech on Sunday, Mr Masagos said: "Building our future Singapore together involves partnering Singaporeans in new ways to deliver solutions, drawing on the diversity of passions and expertise among Singaporeans to strengthen our community and nation."

The Co-creation@M³ series of engagements will be led by Minister of State for Manpower and National Development Zaqy Mohamad, he added.

Speaking to reporters after the event, Mr Zaqy said through the initiative, the leaders hope to engage the Malay/Muslim community, particularly the youth and professionals, to share their perspectives. 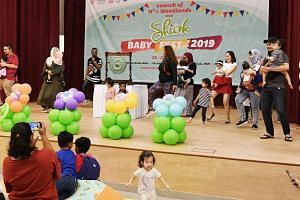 The two ministers were speaking at an event at Wisma Geylang Serai, a social and cultural heritage hub, where 10 exemplary individuals were recognised as part of the #InspirasiSG campaign.

The campaign celebrates inspirational stories from the Malay/Muslim community.

Among the individuals was Madam Siti Wahidah, a mother of seven children including a girl with Down syndrome. She is also the main caregiver for her 57-year-old husband, who suffers from various health conditions including diabetes.

Despite her heavy commitments, the 47-year-old housewife finds time to help those who are less fortunate in her community.

Madam Siti is an active member of various grassroots committees in Yio Chu Kang, where she links up needy families with resources so they do not have face their challenges alone.

Earlier this year, she roped in some organisations to collect and distribute Hari Raya essentials such as traditional outfits and cookies, as well as food rations to those who need them.

"There are a lot of residents out there who need our help, and I want to do my part instead of just sitting at home," said Madam Siti.

Mr Masagos, who is also Minister for the Environment and Water Resources, commended the 10 individuals for giving back to society without expecting anything in return.

"Whatever these inspirational individuals have achieved is not impossible, and anyone in our community can do the same, no matter your background or educational level," he said.