Mr Ho Hew Lee is a 75-year-old retired engineer. Yet, it does not mean that he whiles away his hours sedately at home.

A technology expert, he spends his time learning and keeping up to date with information technology trends. With this knowledge, he voluntarily teaches his fellow seniors how to use technology.

Mr Ho is part of a growing number of senior citizens who are choosing to volunteer their time for various causes.

The number of people in Singapore aged 55 and above who volunteer has increased, said organisations and experts.

In a National Volunteer and Philanthropy Centre survey for 2016, published in May this year, the number of people aged 55 to 64 who volunteer has increased from 18 per cent in 2014 to 20 per cent in 2016.

For those 65 and older, volunteerism has gone up from 9 per cent to 19 per cent over the same period.

RSVP Singapore, an organisation that promotes volunteering among the elderly, said that it has seen a 15 per cent increase in the number of new senior volunteers since 2015.

Its executive director, Ms Meng Fong, said that more senior citizens could be volunteering because they realise it is a fruitful way of spending their retirement.

"Some seniors are looking to keep themselves active and to build new social circles. Volunteering is a meaningful use of their time during retirement, and allows them to make new friends and learn new skills," she said.

The organisation also supports those who want to volunteer but are not sure how to begin.

"Some seniors are afraid to start volunteering as they do not know if they have the right skill sets," Ms Meng said, adding that RSVP helps new volunteers overcome this through several ways, such as training sessions to better manage expectations and a buddy system to support them through their initial volunteering journey.

He explained that as "younger cohorts with more experience in volunteering and a stronger culture of volunteerism age into the senior age bands, they continue to volunteer".

Dr Goh also noted the trend of more middle-aged people volunteering, changing the perception that it is only young people who volunteer. "I think the perception is changing to become a more balanced view that volunteerism happens across all age groups," he said.

A way to feel young again

Business as usual for retiree 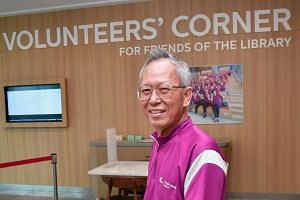 Age is no barrier for tech tutor

"Future seniors are likely to be better educated and to believe in active ageing, which could involve volunteer work," he said.

"They are likely to be more aware of and exposed to areas of need. They also believe in active ageing and contributing their skills and knowledge, which would also allow them to stay connected to the community and be in positions of influence in society."

Associate Professor Philip Yap, senior consultant and director of the geriatric centre at Khoo Teck Puat Hospital, said volunteering could also reap a surprising number of benefits for seniors, as seen from studies in the United States.

"The senior volunteers showed improved physical function in strength and energy with better performance in walking speed and stair-climbing. There were also benefits in brain function," he said.

Volunteering also fulfil the emotional needs of seniors, especially the "need for meaningful occupation, inclusion and a reciprocal relationship of giving and receiving", said Prof Yap.

"Seniors often have difficulties fulfilling these needs, especially when they are retired and may thus suffer from a lack of a role to provide a sense of purpose," he added.

A version of this article appeared in the print edition of The Sunday Times on December 31, 2017, with the headline 'Seniors give back with gusto'. Subscribe
Topics:
More
Whatsapp Linkedin FB Messenger Telegram Reddit WeChat Pinterest Print Purchase Article Copy permalink