Singapore has stepped up its defences against the threat of terrorism, and this includes beefing up security on land, air and sea at events such as this year's National Day Parade (NDP), Defence Minister Ng Eng Hen said during a visit to view parade preparations yesterday.

"This terrorist threat is a long-term problem for the foreseeable decade or even two, or even longer," he said. He noted that it would come in waves, citing the evolution of terror attacks from groups like Al-Qaeda, which took nearly 15 years to weaken, and the Islamic State in Iraq and Syria (ISIS) now, which may take even more time.

Only last Friday, the Indonesian authorities arrested members of a terror cell in Batam whose leader had been planning a rocket attack on Marina Bay together with ISIS militant Bahrun Naim.

Dr Ng made his comments to reporters at the National Stadium - to which the parade and show will return for the first time in 10 years.

The stadium and areas around the Sports Hub have been gazetted a special event area. Dr Ng said: "Legally, it gives the Home Team as well as the SAF (Singapore Armed Forces) specific powers to protect it... Personnel entering it beyond a certain time will be checked, vehicles as well. There will be exclusion zones." 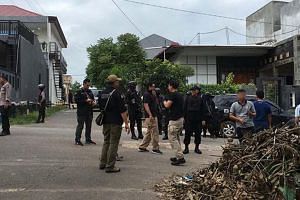 No rocket found, but Batam suspects had firearms training

The SAF has also activated other stepped-up measures for such events, including preparations for scenarios of an attack launched from the sea.

Besides increasing checks on ferries and vessels, the navy and Police Coast Guard will increase their numbers out at sea. The Maritime and Port Authority of Singapore has introduced no-entry zones and no-anchoring zones in certain areas for the duration of the NDP. There will also be preparations against possible aerial attacks.

"Intelligence is key" in the fight against terrorism too - personnel cannot be everywhere all the time or on high alert every moment as "it is not sustainable", he said. This ability to share information with other countries comes with links and trust built up over years.

Singaporeans must also remain united. Terrorism must not be allowed to paralyse daily activities, sow discord, sever communal ties or cause people to live in fear, he said. He added: "If we allow them to do any of these, then I say they have already won."

He said there will be more SAF exercises in urban settings - an area where defence is to be beefed up.

While the SAF and Defence Ministry will do their utmost, they need citizens' support as well, he added, referring to the SG Secure movement, which will be launched next month. This aims to mobilise Singaporeans to be more conscious of security, respond to a terror attack and stay united after it.

He said: "If all of us come together and do what we need to do... I am confident that we can overcome this current wave of terrorist threat that we will have to face together for years to come."

A version of this article appeared in the print edition of The Straits Times on August 09, 2016, with the headline 'Security beefed up at events such as NDP'. Subscribe
Topics:
More
Whatsapp Linkedin FB Messenger Telegram Reddit WeChat Pinterest Print Purchase Article Copy permalink