Two of the USVs - one measuring 9m long and the other 16m - were showcased to the media yesterday, in the open water off Marina Bay.

Said Superintendent Lin Zhenqiang, head of operations and security at the Police Coast Guard: "These USVs are able to conduct autonomous patrols. And this will help us project police presence."

One of the ways they can help is in the detection and arrest of illegal immigrants.

For various reasons, there has been a decline in the number of arrests by the PCG of people coming ashore illegally, from 94 in 2015, to 70 last year, the police told ST.

Up to November this year, 63 illegal immigrants had been caught by PCG officers.

Last year , it was reported that 314 CCTV cameras will be built around Singapore's shoreline, adding to other security measures like advanced electro-optic cameras, radar systems and daily patrols.

On the surface, the USVs look like ordinary patrol boats but they are actually loaded with a multitude of cameras, radar, sensors, search lights and loud-hailers.

The Straits Times understands that assessments are currently being made to the USVs' communication systems and the vessels' seaworthiness, including how they react to avoid collisions at sea.

At present, there is no weapon system attached to the USVs but they do have an automatic fire extinguishing system.

On the larger vessel, a rail system along its rear deck allows coast guard officers to modify it to meet operational needs, for instance by slotting in extra equipment, if needed.

Aside from projecting a police presence to deter crimes at sea or even potential terrorist acts, the USV, which are capable of speeds of about 30 knots, or 55kmh, could help in easing manpower issues. 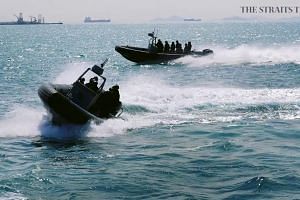 Risky ops all in a day's work for Coast Guard

Highly trained PCG officers, however, will not be entirely replaced by these sea robots as they are still needed in seaborne operations.

"Where necessary, our (PCG) officers can also take over the remote control of these vessels and respond to these threats," said Supt Lin.

So while USVs can be programmed to patrol a set route autonomously, these sentinels will alert on-shore operations if they detect an intrusion.