SINGAPORE - The end of an era for Taiwanese bubble tea brand Gong Cha beckons, as the last of 80 outlets serves its final drinks on Sunday (June 4).

A snaking queue of around 90 people was spotted at its remaining Marina Bay Sands outlet at about 3.45pm for their last sips of the popular bubble tea brand's offerings.

By Monday (June 5), all 80 outlets have been replaced with homegrown bubble tea brand, LiHo, which will be selling a new range of drinks including cheese tea. The new brand intends to open a total of 86 outlets by the end of the month.

Gong Cha, which was introduced to Singapore by RTG Holdings in 2009, was the largest bubble tea chain here. Its closest competitor, Koi, has 42 outlets across the island.

After the move to replace Gong Cha with LiHo was announced last Monday, queues have been forming at both brands' outlets across the island, said a spokesman for RTG Holdings.

While the company did not disclose the number of customers the remaining Gong Cha outlets received since the announcement, its spokesman said it is "definitely much higher than usual". 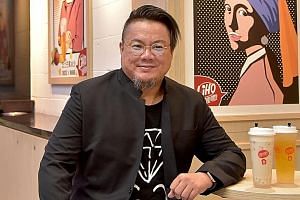 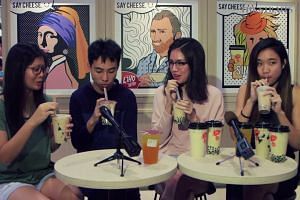 LiHo vs Gong Cha: Which is better?

During the lunch peak hour last Friday, The Straits Times found at least 35 customers queuing to order at the Marina Bay Sands' Gong Cha outlet, including Ms Vanessa Ow, who was working at the ongoing PC Show.

"I'm not really a big fan, but I decided to queue and savour it before it closes down," said Ms Ow, 20, who was in line for at least 20 minutes.

Ingredients such as honey and matcha for some drinks also ran out across Gong Cha outlets.

Over at the new LiHo outlet at One Raffles Place, curious office workers ensured a steady stream of customers. Several that ST spoke to last week said they hope the quality of the new LiHo drinks would be as good as its predecessor.

Auditor Stephanie Rajaiah, 26, who said she would order something similar to her usual Gong Cha drink of earl grey milk tea, said: "With the cheese tea, LiHo has a unique concept, it's something different. But I'm unsure how it will taste."

Another customer, financial consultant Sam Liew, 28, said he usually does not drink bubble tea but decided to lend his support to the local brand.

"I didn't expect the queue to be so long. It was all over social media so everyone is here to try it," said Mr Liew, who waited about 40 minutes for his drink.

Banker Guan Shiya, 28, who used to buy a drink from Gong Cha every day, said she was "very sad" when she found out that Gong Cha was closing down, but decided to give LiHo a try.

Her verdict? "The tea tastes a little bit different, but it's more or less the same," she said.