The Neptune's cup sponge, with its iconic wine-glass shape and giant size, was once abundant in the waters surrounding Singapore.

But it was highly sought after by museums and private collectors, and individuals who harvested it so they may use the cup-like structure as a bathtub for infants.

In 1908, it was thought to have been driven to extinction due to overfishing. But fast forward a century and 2011 brought with it remarkable news - the sponge was rediscovered in the waters off St John's Island. Better still, four more sponges have been uncovered in Singapore since.

The Neptune's cup sponge, which was the first sponge discovered in Singapore in 1822, could grow as large as a metre or more in width and depth. The primitive aquatic animal, which could come in colours ranging from off-white to yellowish brown to orange, draws in water to extract nutrients.

Little is known about the mysterious sponge and scientists here are working to uncover more of its secrets. For example, scientists from the National Parks Board (NParks), together with Tropical Marine Science Institute researcher Lim Swee Cheng, have found that sea turtles eat it. 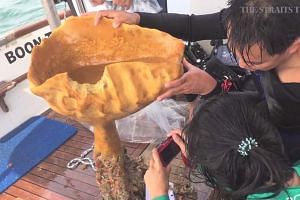 They have discovered bite marks on the edges of Neptune's cup sponges. They have also found that the sponge tissue regenerates quickly. It was previously thought that the sponge had a slow rate of regeneration, thus contributing to its disappearance.

Dr Karenne Tun, director of the coastal and marine division at NParks' National Biodiversity Centre, said: "We noticed some bite marks on them one day and two weeks later, when we went back to check, the tissue had regenerated. Its quick regeneration shows that it is a sustainable source of food."

Sponges are filter feeders and good sponge diversity can help to manage water quality in the reef area, she added.