Not much is known about the critically endangered sea turtles of Singapore. But a marine turtle working group hopes to change that with research.

At least nine groups are studying how to conserve local wildlife with science-backed strategies.

Animals such as pangolins, otters and both species of monkeys in Singapore - long-tailed macaques and Raffles' banded langurs - have already benefited.

The working group for the shy langur was set up in August to map out an action plan for the conservation of this species in the coming years.

In May, members of the otter working group leapt into action to rescue and rehabilitate a six-week-old smooth-coated otter pup which almost died when its family did not return for it. 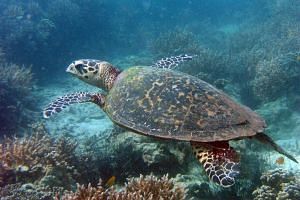 Dr Lena Chan, group director of the National Parks Board's National Biodiversity Centre, said working groups focus on animals at most immediate risk of local extinction, as well as those associated with issues that affect a range of stakeholders.

She said: "Working groups for otters, macaques and pythons were formed to better understand and address issues such as human-wildlife interaction and conservation, to minimise negative impact on stakeholders while also achieving conservation aims."

For Ms Sabrina Jabbar of the macaque working group, a milestone was a "monkey-herding" process some members developed that kept animals away from homes in Bukit Timah and reduced instances of human-animal conflict. This involved a trained guard at a hot spot shooing monkeys from residential areas by tapping a stick or umbrella on the ground, or telling the monkeys to go away.