They will boost SCDF's capabilities to handle maritime emergencies

Three new marine firefighting vessels - including the world's most powerful in terms of water output - were commissioned by the Singapore Civil Defence Force (SCDF) yesterday.

The Red Sailfish is equipped with 12 water and foam monitors that allow 360-degree firefighting coverage, six automated decontamination shower cubicles, and a launch and recovery system for the deployment of a rigid-hulled inflatable boat for rescue operations.

It is also able to automatically maintain its position on its own in the water, which helps to stabilise the water and foam monitors for firefighting operations.

Meanwhile, the Red Dolphin will be the primary vessel for major marine incidents, such as marine CBR incidents and firefighting and rescue operations.

The vessel, which has a top speed of 30 knots, is equipped with a CBR filtration system, cubicles for decontamination and positive pressured cabins. It also has a thermal imaging system that will help with the detection of casualties from a distance under low light and visibility conditions, as well as identifying heat spots on the affected vessels for cooling operations.

The Red Manta will be used as a marine tactical headquarters for major incidents involving large numbers of casualties.

It has a capacity of 300 passengers, and features a medical treatment room and decontamination chambers. The vessel has a top speed of 35 knots. 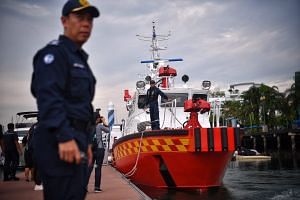 The Red Manta is also equipped with a lift system, which can be used to bring casualties from the main deck to the heli-winch pad above, where they can be airlifted to hospitals.

The SCDF did not reveal the cost of the vessels, for which construction began in 2017.

Last year, marine firefighting resources from the SCDF were deployed in a five-hour operation to put out a fire that erupted in the upper decks of a container ship.

Earlier this month, SCDF marine firefighters were activated when a fire broke out on a coastal fish farm off Pulau Ubin.

This will improve the response time for outlying islands, he told about 200 guests and representatives from various foreign fire departments at the ceremony.