The Singapore Armed Forces (SAF) has introduced steps to improve the way it manages heat injuries among national servicemen, following lapses and breaches in training and safety as well as casualty mismanagement that led to the death of a serviceman in April.

The measures include expanding the use of purpose-built cooling pads, implementing an arm immersion cooling system and simplifying evacuation procedures.

Giving a detailed account of the circumstances surrounding Corporal First Class (CFC) Dave Lee Han Xuan's death based on the preliminary assessment of the Committee of Inquiry (COI), Defence Minister Ng Eng Hen disclosed the steps taken as he stressed the need for safety.

"We need a strong SAF that can defend Singapore, but it must and can be built without compromising the safety and well-being of Singapore's precious sons serving national service (NS)," Dr Ng said in a ministerial statement.

CFC Lee, 19, a Guardsman from the 1st Battalion Singapore Guards, died on April 30, two weeks after being admitted to Changi General Hospital for heatstroke. He had completed an 8km fast march in Bedok Camp on April 18 before he showed signs of heat injury.

During training the day before the fast march, CFC Lee had to run at a faster pace than he was required to, said Dr Ng. The commanders did this to enhance fitness and foster cohesion in the platoon, but this was a breach of training safety regulations, he added.

Later that night, CFC Lee's platoon was punished for about 30 minutes after some soldiers were repeatedly found to be using their mobile phones after lights out.

The punishment comprised bear crawls, sprints, leopard crawls, push-ups and crunches, and the soldiers also had water poured over them. They eventually had about six hours and 15 minutes of sleep instead of the stipulated seven hours.

The commanders did not seek prior approval for this "informal punishment" or inform their superiors after it was done.

The next day, CFC Lee was the last to complete the 8km fast march. Shortly after, he was seen to be disoriented and was immediately attended to.

Those who attended to him thought he was suffering from physical exhaustion, and the COI found there was inadequate on-site casualty management. His evacuation to the medical centre was also delayed. 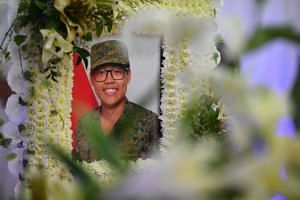 He was happy in the army and had a lot of friends, says mum

Dr Ng said that the COI also noted that while CFC Lee had no significant medical history, he had been taking medication in the weeks prior to the march for acute upper respiratory tract infection.

The COI's preliminary assessment was that accumulated fatigue, insufficient rest, CFC Lee's less-than-optimal state of health and potential use of medication could have led to the heatstroke.

"However, the COI's preliminary assessment was that the likely reasons for CFC Lee succumbing to the heatstroke were inadequate on-site casualty management and delayed evacuation to the medical centre," said the minister.

Dr Ng said relevant persons involved in CFC Lee's case have been removed from command and could face criminal charge or military prosecution. However, no evidence of foul play or medical negligence has been found, he said.

The SAF has since been, or will be, putting in place a range of measures to reduce the risks of heat injuries, he said. Besides cooling and evacuation measures, they include more opportunities for make-up training and emphasising "open reporting", which means soldiers can call a hotline to report unauthorised activities.

"The army will encourage our soldiers not to push themselves beyond safety limits," he said.

Describing CFC Lee as an exemplary soldier who served with commitment and was well-respected by his peers for his positive attitude, Dr Ng said the loss of such a good soldier is "deeply grievous to us".

"It will take collective effort to achieve zero training fatalities. Each serviceman must take care of himself or sound the alert when his buddy is not well, or if regulations are not complied with during training," he said. "Commanders must be alert and pull out early those who are not coping and use another occasion to train."