The Safra Singapore Bay Run & Army Half Marathon, one of the largest annual running events here, has been called off this year to enable the Singapore Army "to better manage the overall tempo for a busy year".

The Singapore Army announced this yesterday as it gave an update on how training for soldiers has resumed since a safety time-out was progressively lifted from Feb 7.

The time-out, which started on Jan 23, was among measures taken after actor and operationally ready national serviceman Aloysius Pang, 28, died from injuries suffered during a military exercise in New Zealand in January.

In a Facebook post yesterday, the army said it will be involved in supporting the Singapore Bicentennial commemoration this year.

The last time the run and half marathon was put on hiatus was in 2015, because of SG50 celebrations, it said, adding that Safra and the army will review whether the event will be reinstated subsequently. The annual race is co-organised by the army and Safra and usually takes place in the later half of the year.

More than 41,000 people took part in last year's event held in the Marina Bay area, which is aimed at promoting fitness and bonding among active and national servicemen and their families.

Giving an update on training, the army said there has been a "one-time impact" on activities as a result of the two-week safety timeout that was imposed after Corporal First Class (NS) Pang's death.

For example, Basic Military Training Centre recruits who graduated yesterday had a 12km graduation march instead of the usual 24km march.

This was because they were not able to complete the required build-up training in line with existing training directives, the army said, adding that the 24km march will be reinstated for subsequent batches.

In-camp training for three national service units had also been cancelled as it fell within or immediately after the safety time-out. The cancellation will not affect the fulfilment of the NSmen's training cycle. The Individual Physical Proficiency Test for NSmen has also resumed. 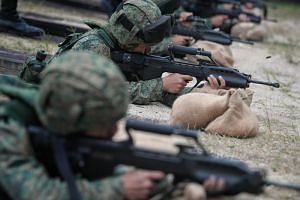 Last month, Defence Minister Ng Eng Hen gave some indication that some of the responsibilities that the Singapore Armed Forces (SAF) handled might be dropped.

He was responding to Workers' Party chief Pritam Singh, who asked in Parliament on Feb 11 whether "non-operational responsibilities" that involve national servicemen such as the National Day Parade and the Army Half Marathon would be reviewed.

Dr Ng said then that certain activities have been reviewed, but the announcement on what will be let go "so that it gives them enough bandwidth to focus on safety" will be made later.

Business development director Tan Hon Kee, 44, said that while he understood the rationale of lightening non-operational demands on the army to better focus on training safety, a better move could have been to appoint an event organiser to run the race.

He has taken part in four such runs since 2013 and said the Army Half Marathon is subsidised for NSmen, so they can enjoy a half-marathon race at an affordable rate. It cost an NSman $16 for the 21km run last year during the early registration period, compared with $65 for the public, which is about the cost of similar runs.

SEA Games two-time marathon champion Soh Rui Yong, 27, who won last year's 21km Army Half Marathon men's category, said the cancellation was a pity, as it is the biggest half-marathon race in Singapore.

"It's a race that the community gets excited about and looks forward to every year, helping to develop fitness and running performance among elite athletes and recreational runners alike," he said.

MP Joan Pereira, deputy chairman of the Defence and Foreign Affairs Government Parliamentary Committee, said "it makes sense" for the SAF to cut back on some activities given it is supporting the bicentennial commemoration. She added: "It's important to prioritise, given limited resources every year, and having to maintain a high level of operational readiness."