SINGAPORE - An interactive exhibition held in a display modelled after a twakow - bumboat that used to ply the Singapore River - will be one of the main features of River Hongbao as the organisers go all out to attract the young.

More than 50 volunteer youth ambassadors will man the exhibition during the event, which has been held annually to celebrate Chinese New Year since 1987.

This year's celebration at The Float @ Marina Bay will also feature a range of social media activities, such as an Instagram photo competition where the winner will get a pair of business class return tickets to New York.

As this 33rd edition of the River Hongbao is also a bicentennial edition, the exhibition - A Harbour And Home: The Singapore River Through Time - will highlight the history of the Singapore River's transformation.

One of the student guides from Nanyang Girls' High School, Laura Lee, 16, said on Thursday (Jan 31) at a media preview of the exhibition: "It is a once-in-a-lifetime chance to be part of the bicentennial edition of the event, and it is interesting to see how much of Singapore history stems from the Singapore River."

For the exhibition, she and her schoolmate Rae Tng, also 16, penned a Chinese poem on the river, reflecting on how all Singaporeans can contribute to the nation in their own ways.

The River Hongbao Hackathon, an entrepreneurship competition that started last month, was also held for tertiary students, and the top three teams will be running their stalls at the event. 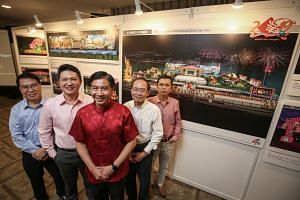 Mr Ang Wei Neng, chairman of the River Hongbao organising committee, pointed to the use of technology, particularly social media, at this edition of River Hongbao.

He noted how, for example, the organisers commissioned local YouTube film-makers Night Owl Cinematics to produce a marketing video for the event.

"With all these interactive components and the use of technology, we hope to encourage younger Singaporeans to come to River Hongbao with their friends and family to enjoy the excitement of Chinese New Year," said Mr Ang.

On the first two and last two nights of the festival, visitors will also be treated to fireworks displays - each lasting 12 minutes - by award-winning artists from Australia, China, Italy and the United States.

Each night's display will be planned by a different country and feature a different theme.

Admission to the festival is free.